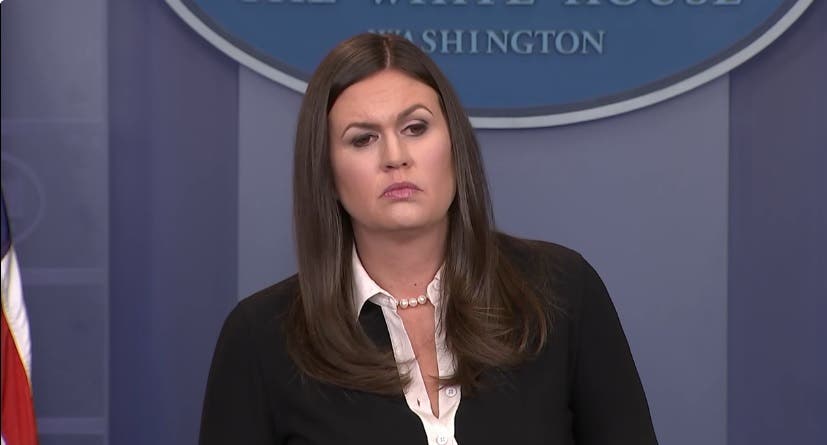 Press Secretary Sarah Huckabee Sanders was asked during this afternoon’s press conference about whether or not the President had been informed that the story of “Black Jack” Pershing that he tweeted about in response to the recent terror attacks in Barcelona was a myth.

Study what General Pershing of the United States did to terrorists when caught. There was no more Radical Islamic Terror for 35 years!

“On August 17th, the President again referenced a fictitious story about General Pershing committing a mass execution in the Philippines. A couple questions on that.

Does the president know that the story is false? If so, Why does he keep repeating it? Why does the White House seem to think it’s appropriate for him to keep repeating this false story?”

“I haven’t spoken to him about it yet,” she said before quickly deflecting and moving on, entirely sidestepping the fact that President FOX News Grandpa is literally repeating chain hoax emails from the early 2000s as a fact.

This wasn’t the first time Trump has brought up General Pershing. Last February, Trump told the extremely fake news tale of Pershing at one of his rallies.

“He was a rough guy!” said Trump, before telling the audience that:

He caught 50 terrorists who did tremendous damage…and he took the 50 terrorists and he took 50 men and dipped 50 bullets in pig’s blood. You heard about that? He took 50 bullets and dipped them in pig’s blood [which is considered haram]. And he has his men load up their rifles and he lined up the 50 people and they shot 49 of those people. And the 50th person, he said, you go back to your people and you tell them what happened. And for 25 years there wasn’t a problem.

This story is entirely fake.

It just goes to show that all the efforts by new chief of staff John Kelly and the exit of Steve Bannon have done absolutely nothing to temper the President’s most offensive impulses – and that his staff continues to let our toddler-in-chief fire off racist conspiracy theories without forcing him to face the truth.