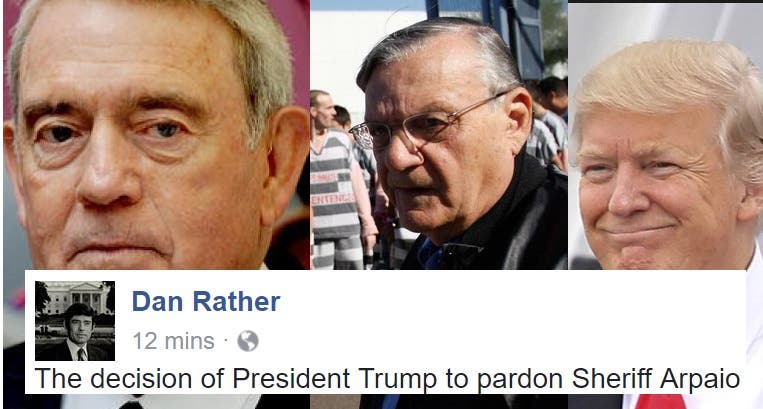 President Donald Trump stunned the nation this evening when he tried to use the cover of a Category 4 hurricane to issue a pardon for America’s most racist sheriff, Joe Arpaio, in a pandering move to his base.

Legendary reporter Dan Rather took to Facebook this evening to share a poignant analysis of the surprise move – and what it means for our nation.

The decision of President Trump to pardon Sheriff Arpaio Is a perversion of justice and demeans the prerogatives of the presidency.

Compared to the impact of sweeping policies, it is a token gesture. But the symbolism is stark, provocative and important. Mr. Trump continues to proudly strut on the global stage as a divisive actor heedless of the shouts of derision and censure from the majority of his audience. He seems only concerned in basking in the lusty cheers of intolerance from his enabled base.

Amidst rumors that Mr. Trump will end the deferred action policy for dreamers, the already glowing embers of racial strife risk bursting into destructive flames. And Mr. Trump appears eager to fan them on.

Rather is absolutely right. He could not have sent a louder signal to racists and white supremacists that he endorses and encourages their appalling behavior.