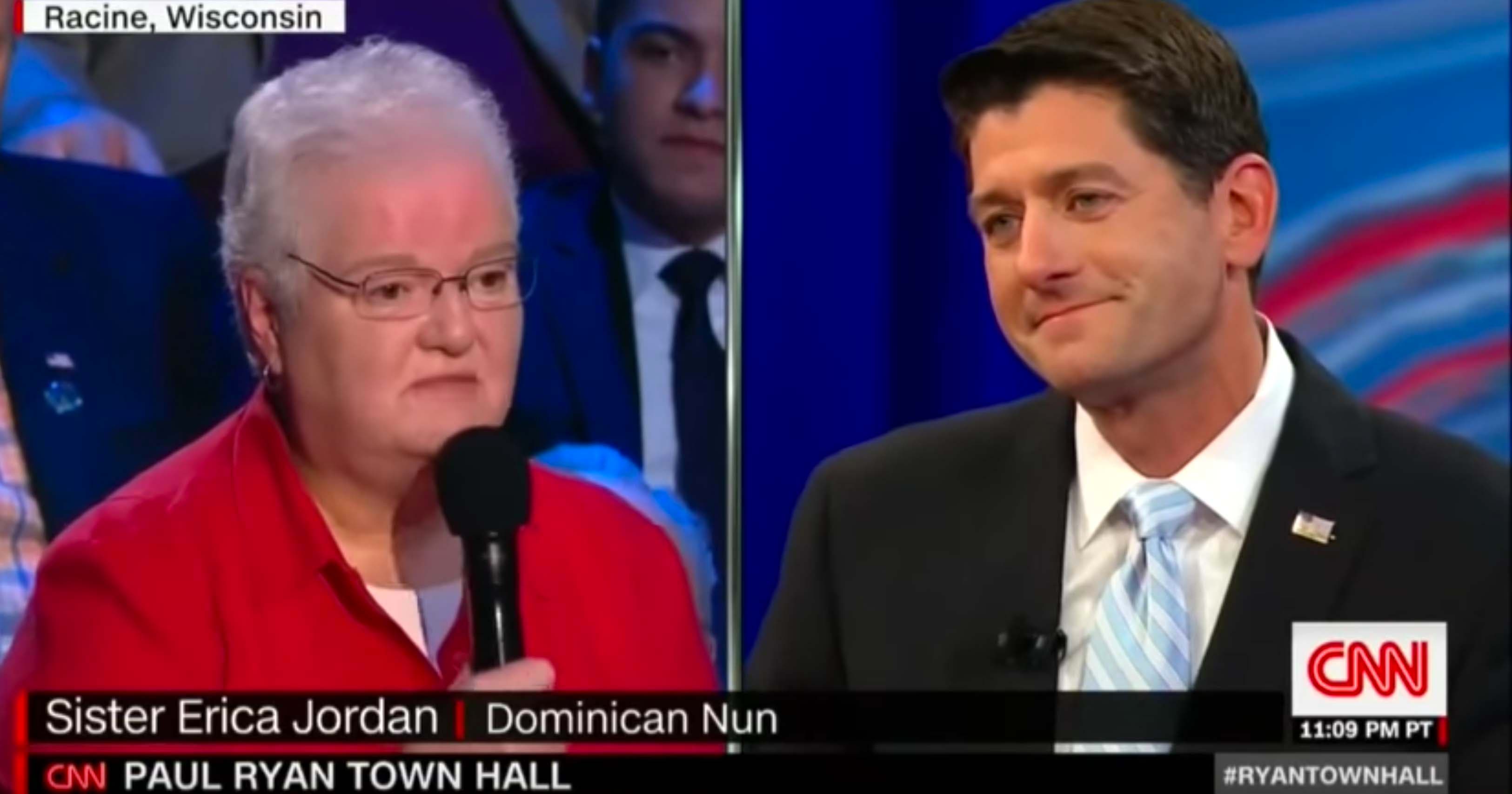 Ryan, a lifelong Catholic, gave an answer that was slick and polished but so divorced from reality that at one point the crowd booed (video below).

Now, in an interview with John Gehring of Commonweal, Sister Jordan is speaking out about the condescending way the Speaker treated her.

“It’s unconscionable that our elected officials feel free to do what they’re doing right now taking away health care, threatening Social Security and Medicare. It is just wrong,” Sister Jordan said, explaining why the question is important to her.

“Speaker Ryan is a leader and he seems to be totally complicit in this way of thinking,” she continued.

“I want him to really think about my question. I’ve been so distressed by this Congress and going through what we did during the health-care debate. There is such a disregard for the common good and the poor. It makes me angry…. I think he is really naive. Trickle-down economics has never worked. The budget is cutting programs in a way that hurts the poor. I wonder how often he talks to poor people.”

Ryan’s answer to the question and the tone with which he delivered it only made things worse for Sister Jordan:

“I don’t think he has much opportunity to really talk to people who are struggling. I felt he was pretty condescending. He started his answer by saying “spoken like a great Dominican nun.” It felt like a pat on the head, which is the way sometimes people treat sisters… His answer made me mad because it felt like he was asking the churches to take care of the poor… I think he missed something in his Catholic education. It is not just about ourselves or our families. It seems the concept of the common good has been lost [on him].”

Speaker Ryan’s faults lie not in his ability as a politician but that his political ambition has supplanted his humanity. Sister Jordan wanted answers that will help people other than Ryan and his corporate allies. This week, she learned she won’t get them from Paul Ryan, but it doesn’t seem like she has any intention of giving up her pursuit of real answers and help for the poor and dispossessed.

For that, we can all be grateful.

Sister Jordan’s interaction with Speaker Ryan is below, and her entire interview can be read at Commonweal.org.