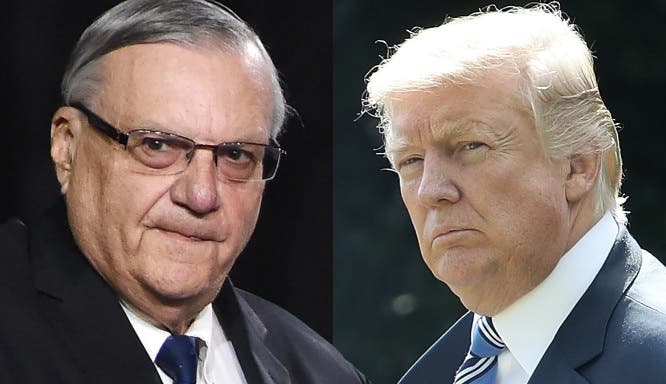 President Trump stunned the nation this evening when he followed up his appalling ban on transgender Americans from serving in the military with a pardon for notorious racist Sheriff Joe Arpaio.

Six-term sheriff Arpaio gained notoriety for “crime suppression sweeps” that rounded up Hispanics and suspected illegal immigrants en masse. He was ordered to stop by a court in 2011, but he continued to run his racist sweeps for another 18 months so he could burnish his xenophobic credibility for his re-election campaign. He was found in contempt of court last month for refusing to obey a court order mandating an end to his discriminatory policies.

Arpaio tried to argue that he had violated the order “unintentionally,” but it appears the judge didn’t buy that obvious excuse.

The three admitted to violating the orders but held that their actions were “accidental.” but the Justice Department doesn’t believe their hollow excuses for continuing to racially profile Hispanic citizens for another eighteen months after the orders to stop were issued

As sheriff, he was accused of a wide number of crimes, including “abuse of power, misuse of funds, failure to investigate sex crimes, improper clearance of cases, unlawful enforcement of immigration laws, and election law violations.”

He set up what he himself referred to as a “concentration camp” for prisoners and established an armed anti-illegal immigration militia to help patrol the border. He also failed to investigate 32 child molestation cases because the victims were the children of illegal immigrants.

For Trump to pardon Sheriff Arpaio while the nation’s attention is focused on the Category 4 hurricane that is about to devastate wide swathes of Texas is the height of cowardice. After blaming both sides for the neo-Nazi violence in Charlottesville two weeks, he could not have sent a louder signal to racists and white supremacists that he endorses and encourages their appalling behavior.