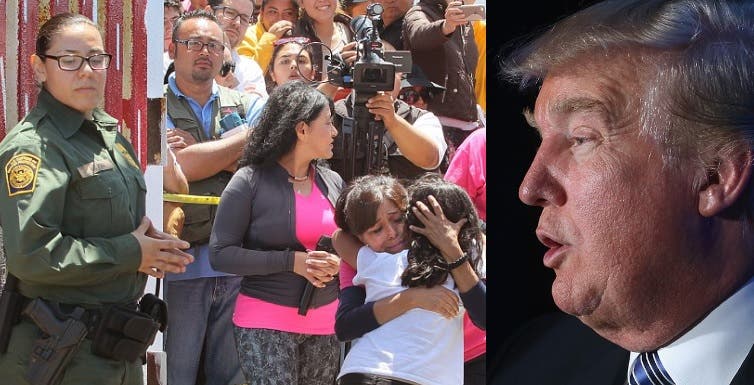 While most of us see the oncoming devastation of Hurricane Harvey as a natural disaster, it appears that President Trump’s deportation force sees it as an opportunity.

The Texas Tribune reports that the Texas Border Patrol will be keeping open their immigration checkpoints north of the Rio Grande Valley, meaning that undocumented people fleeing the onset of what is likely to become a Category 3 hurricane with winds of 74 to 110 mph must choose between their lives and the possibility of incarceration in ICE concentration camps and deportation.

“Border Patrol checkpoints will not be closed unless there is a danger to the safety of the travelling public and our agents. Border Patrol resources, including personnel and transportation, will be deployed on an as needed basis to augment the efforts and capabilities of local-response authorities” said the agency in a statement.

The open checkpoints are especially bad news for the tens of thousands of residents of dozens of “colonias” in the area – small settlements on barren land sold to low-income residents ostensibly to provide cheap housing but effectively functioning as ghettos for poor Hispanic migrants. The distance from urban areas keeps them out of sight, out of mind – and allows the local governments to get away with neglecting them.

Due to their remote locations and impoverished residents, the state does not feel the same impetus to provide basic services to the people living in the colonias, meaning many of them lack such essential services like running water or sewage.

Many of the completed residences are “made of stucco or brick, others are jerry-built shacks of plywood or ramshackle residences pieced together with cinderblocks, metal sheets and tarps” reports Al Jazeera. They have little chance of standing against the winds of a hurricane.

This is only the latest in a long string of appallingly inhumane tactics by the immigration authorities in the United States – like using children to entrap and deport the parents, accusing pot-smoking teenagers of being in “gangs” as an excuse to detain them, and deporting injured migrant workers whose companies don’t want to have to pay worker’s compensation for their on-the-job injuries.

The establishment of for-profit detention centers has turned the agencies of soft ethnic cleansing into a business that requires a constant stream of bodies to make money – and under President Trump, the cruel and callous agents of ICE and the CBP have set about their task with horrifying enthusiasm, no matter the human cost.

The dehumanization and commodification of people of color in the United States is late-stage capitalism harnessing the institutionalized white supremacy in our “law enforcement” agencies in order to create yet another source of revenue for the plutocrat class.

Nothing makes that more clear than presenting the innocent people of Texan colonias with the choice of death or deportation.