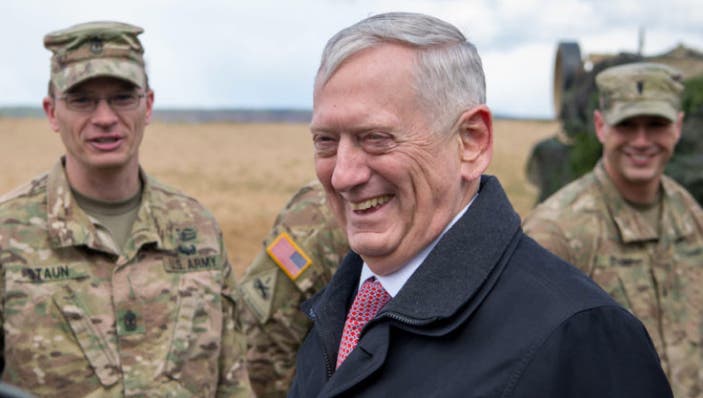 The President of the United States is also the Commander-In-Chief of the US Armed Forces, so, in theory, the generals and admirals in the various branches of the services have to follow the commands of their ostensible leader.

Perhaps that’s why the video that leaked today of former Marine Corps General and current US Secretary of Defense James Mattis addressing our troops stationed abroad is rapidly going viral and creating controversy.

While it is certainly no secret that the US is at one of the most politically divided moments in its history, the military practice of eschewing overt partisan politics has a long tradition in this country, which, while it has faced a civil war, has never faced the type of military coups that are a regular occurrence in less robust democracies.

After last week’s violent neo-Nazi protests and the overwhelming counter-protests by anti-fascists from all walks of life, the divisions in this country haven’t been this stark since the Sixties (either the 1860’s or the 1960’s, take your pick).

It is in this polarized environment that Secretary Mattis felt the need to speak to our diverse and dedicated armed forces who are representing and protecting our country in the various foreign missions that they are currently engaged in.

The video, which was taken at an undisclosed location overseas, features Mattis speaking somewhat informally to a gathering of ordinary troops, rather than a group of military brass. Feeling the need to address the issue of a divided nation in an environment where cooperation and cohesion are of paramount importance, Mattis didn’t mince words:

“Our country right now, it’s got problems we don’t have in the military. You just hold the line until our country gets back to understanding and respecting each other and showing it.”

While Mattis doesn’t mention his boss, the Commander-In-Chief, anyone paying the least bit of attention to current events will know that understanding and respecting others of different backgrounds, ethnic roots, and skin colors is not one of President Trump’s primary competencies, to vastly understate the issue.

Mattis went on to explain that America’s global power emanates from two sources, intimidation, a power that is fairly simple to exert when your country’s military budget exceeds that of the next 8 largest countries combined, and inspiration, something that Mattis stated that he hoped to see America regain.

Of course, the Secretary didn’t mention Trump by name in bemoaning the lack of national unity and the absence of inspiration, but the country is at the point where spelling out the obvious is really not needed.

Let’s hope that Secretary Mattis’s efforts to encourage the troops and keep them unified in purpose are successful. The consequences of a military as divided and at odds with itself as the country as a whole has been recently would not bode well for the future of our democracy. No sensible US citizen would look forward to civil war amongst a divided and heavily armed contingent of forces, nor would they like to see our democracy descend into a series of violent coups enacted by a group of disgruntled generals.

Check out the video for yourself below.

Watch Defense Secretary Mattis giving an impromptu speech to deployed soldiers: "As Americans we have two powers; the power of inspiration, and the power of intimidation."