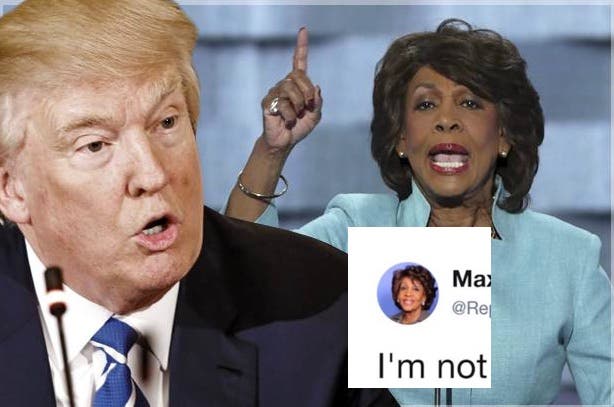 Congresswoman Maxine Waters is not one to hide her…let’s call it disdain…for President Trump. So it’s only appropriate that we check in to see how she reacted to the Con-mander-in-Chief’s pardon of notorious bigot, court-defying, prisoner torturing former Sheriff Joe Arpaio of Maricopa County, Arizona.

Well, Rep. Waters is not amused. Nor is she surprised.

I'm not surprised Trump pardoned racial profiler Arpaio. White Nationalists, KKK, & Duke celebrated Trump's election b/c he is one of them!

This is what America has come to. If only Waters was mistaken, but given the events of the past week, it’s difficult to dispute her assessment. Waters doesn’t simply call the president an outright racist, she backs up her opinion with evidence.

A majority of the country agrees with this assessment, despite what the true purveyors of “fake news”, the Fox News, Breitbart, and Info Wars and their ilk, may claim.

Trump knows the walls are closing in on him & Russia collusion. His actions this week are acts of desperation. Ultimately, Congress must act

Aha! With many people interpreting the pardon of Arpaio as a secret signal to the many Trump campaign principals now being grilled about that pesky collusion with Russia to keep their mouths shut and just wait for their presidential “get out of jail free” card, Special Prosecutor Robert Mueller’s army of legal bloodhounds will have to work that much harder to turn the screws in order to force cooperation and get the alleged co-conspirators to turn state’s witness and spill the beans.

At least Rep. Waters knows that the resolution to all of this madness is in her (and her congressional colleagues’) hands. Let’s hope that they act and act soon.