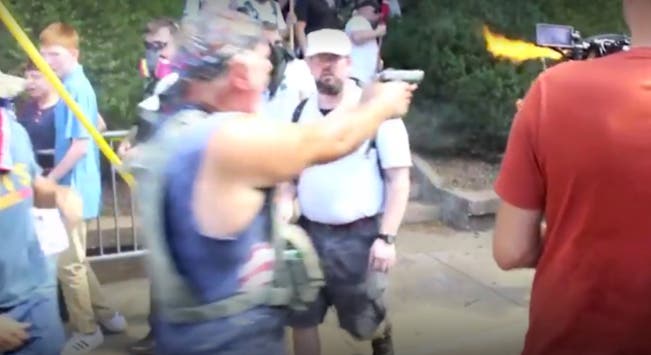 While President Trump is still insisting that the violence at Charlottesville, Virginia’s “Unite The Right” rally was the responsibility of “both sides”, a recently uncovered video shows exactly who was responsible for armed violence aimed directly at anti-Nazi counter-protestors.

According to a report in The New York Times, Charlottesville police have arrested a man for shooting a gun at a crowd of counter-protesters during the fracas, after the man was identified in a video of the incident that the American Civil Liberties Union provided.

The video clearly shows an armed white nationalist covered in body armor yell “Hey, nigger!” and then shoot towards a crowd including a black man holding a spray can being used protectively as a flame thrower. The shot luckily missed its intended target, but all of this happened in the full presence of about a dozen state police officers, who did nothing to confront the armed perpetrator or check on the result of the gunshot. Instead, the man simply turned around and continued to march with his fascist buddies without immediate consequence.

Residents of Charlottesville are dumbfounded by the failure of police to take action at the time of the incident and are speculating that it was the intentional policy of the police to not intervene.

A state police spokesperson claimed that the officers simply did not hear the shot amidst the chanting of the crowds and the chaos of the protests, but according to one bystander that was simply not believable.

“We all heard it and ran — I know damn well they heard it,” said Rosia Parker, a community activist in Charlottesville. “They never moved.”

While police insist that no order to disengage was given, local activists believe that the lack of action was a deliberate response after local police were reprimanded for their severe reaction at a recent KKK rally where anti-Klan protesters were met with tear gas and multiple arrests.

As for the man with the improvised flame thrower, he says that the can was thrown at him by one of the white power marchers earlier in the day and that it was the only form of protection he had from the alt-right militia aggressively confronting the crowd of counter-protesters.

Given the abandonment of policing duties by the officers assigned to keep order at the violence-laden rally, it’s a miracle that only Heather Heyer was killed by the neo-Nazi marchers during the event. Thanks to the ACLU and the justifiably enraged citizens of Charlottesville for ensuring that the video of the shooting was circulated and the suspected perpetrator was identified and arrested.