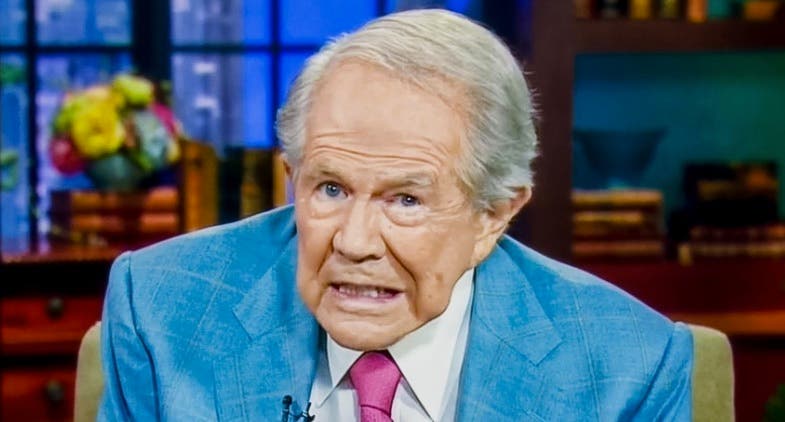 The religious right has gravitated to the Republican Party for years now, despite the fact that the vast majority of Republican policies are diametrically opposed to the teachings of Christ, who famously said “it is easier for a camel to go through the eye of a needle than for a rich man to enter the kingdom of God.” (Matthew 19:24)

Now, a former producer of Pat Robertson’s 700 Club television series has revealed that the infamous televangelist and fervent Trump supporter was far more interested in draining the pockets of his gullible TV audience than any spiritual goals of delivering salvation.

Terry Heaton was the former Executive Producer of The 700 Club on the Christian Broadcasting Network during the 1980’s and 90’s when it became one of the first of the religious broadcasters to delve heavily into conservative politics and helped launch the culture wars that rage onto this day.

Heaton has just written a new book, The Gospel Of Self: How Jesus Joined The GOP, that details how a religious ministry transformed into a media machine that was more concerned with building political power and taking in as much tax-free money as possible than with saving souls and exemplifying the ideals of Jesus.

In an interview with Vox, Heaton said he wrote the book “because I felt I needed to apologize for my role in what we have in front of us today, although I don’t necessarily feel guilty about it. I just want to get it on the record that I participated in something that has turned out to be pretty bad.”

Heaton, with his background in TV and advertising, transformed The 700 Club into one of the most successful Christian-right media outlets ever created. Preaching a gospel of prosperity and self-help, Robertson quickly got used to the massive cash flow that his followers sent his way after his televised appeals.

Heaton, however, began to question the motivations and tactics behind Robertson’s ministry, feeling that the operation had transformed from a religious mission to a political one.

“…we wanted to present a different view from, a news and information perspective, about what was taking place in the world, and build that around a biblical perspective: that God is alive and well and that he’s not happy with what is going on in the world.”

“But we used as evidence [for God’s presence] every self-centered trick in the book. When you get into black-and-white theology, you have to be able to explain things in a very simple way. For example, if you believe that God rewards good Christians by making them prosperous, and you’re not prosperous, you have to ask yourself why. And there’s really only two answers to that question. One is that you’re doing something wrong — a.k.a. sinning — and the other is that somebody out there is taking what rightfully belongs to you and you’ve got to do something about that. And that’s a pretty easy sell to human beings — we all want what we don’t have.”

The turning point for Heaton was when he pitched an idea to Roberston for a segment and the preacher’s response showed him what Robertson really thought was important.

“We had this idea to do a series featuring a guy who always got things wrong so that Pat could then come on afterward and tell people what to do right. So we developed a new segment: The conceit was a character who always did things ‘wrong’ so Pat could come out and teach him,” the producer said.

“The pilot was a guy who was constantly losing money because he was trying to give his way out of debt. So he’d look at the Bible where it says ‘you receive a hundredfold for what you give,’ and if he was a $1,000 in debt he’d give away $100 expecting to be able to pay off the debt,” he continued. “And at the end, he turns to the camera and says, ‘What am I doing wrong?’ And we all thought it was brilliant.”

“It was. But I showed it to Pat in the dressing room one day, and he got this sour look on his face and when it was finished. He said, ” You put that on the air and you will cost this ministry millions.”

Instead, the series moved increasingly to a focus on sex, abortion, homosexuality, and birth control.

“All those things worked very well with the type of Christianity we were preaching.”

It is this quote from Heaton’s interview that perhaps best sums up his estimation of the now symbiotic relationship between the Christian right and the Republican party:

“People are living, breathing, and practicing lies. And I don’t think that doing something about it is going to come from anybody who’s lording it over these Christians.”

Our founding fathers enshrined a separation of church and state in our Constitution. One can only imagine the astonishment they would feel if they saw the extent of the entanglements between the evangelical right wing Christian churches and the Republican party currently in power.