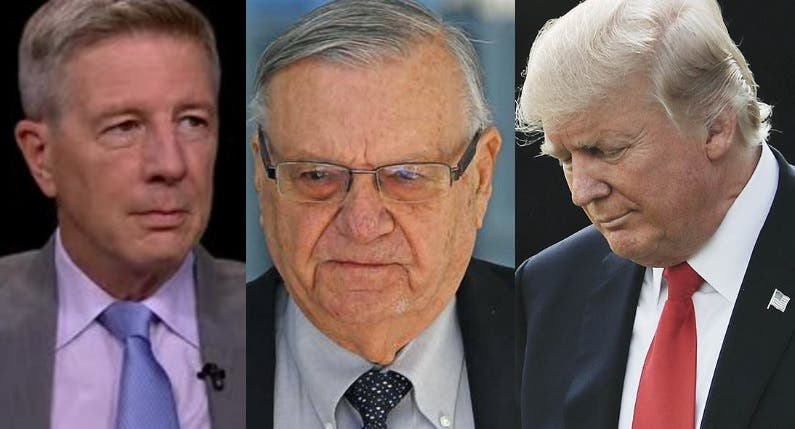 Last night, the President of the United States stunned the nation with an abrupt pardon to a prominent agent of American white supremacy, Sherrif Joe Arpaio of Maricopa County, Arizona.

Arpaio hadn’t even been sentenced yet for his conviction of criminal contempt, but after a week of pathetically insincere attempts at calling for national “unity,” Trump decided to blow the largest racial dog-whistle he could find, even though his actions fly in the face of the spirit of the presidential power to pardon.

That’s why renowned author Charles Kaiser penned a brutal takedown of the President’s actions, calling them the “opening act of a constitutional crisis,” spelling out in no uncertain terms the challenge we’re now facing.

By pardoning a man convicted of criminal contempt for direct violation of a Federal order, Trump is now flaunting his eagerness to overturn the rule of law in America.

I have never seen anyone who has acted more obviously guilty than Donald Trump has almost every single day since he became president. From his tete-a-tete with James Comey, in which he asked the FBI director to end his investigation of Michael Flynn, to his firing of the same man when he failed to heed that warning, to his newly-reported phone call to North Carolina Senator Thom Tillis to complain about a bill that would protect special counsel Robert Mueller’s independence, the president has engaged in one blatant attempt to obstruct justice after another.

Kasier reveals what he believes is the real reason Trump pardoned Arpaio – to show his former campaign team members currently under the scrutiny of Special Counsel Mueller that he is willing to do the same for them too, so long as they keep silent as to what actually happened between the Trump campaign and agents of the Russian Federation:

For many weeks, Washington has been swirling with rumors that Mueller already has secured the cooperation of Michael Flynn and Paul Manafort in his investigation of the president. And Trump undoubtedly is more vulnerable to the testimony of these two men than he is to that of any other players in this fearful drama. Therefore, Trump must feel compelled to send this message through Arpaio’s pardon: the president is eager and willing to do the same thing for anyone who might be pressured into testifying against him.

The warning signs, says Kaiser, are all too familiar to him.

I have a written a book about France under fascism, and what we are now experiencing is exactly what incipient fascism looks like.

The combination of Trump’s relentless assaults on the free press, his open encouragement of Nazis — which is the only honest description of his initial refusal to condemn them — and now a pardon without even pretending to go through the normal channels of the Justice Department — these are all the acts of man who is blatantly defying his sacred pledge to uphold the Constitution of the United States.

He finishes with an ominous warning to the Republican Party, comparing them to the Vichy French who enabled the Nazi takeover of their nation and the genocide of French Jews.

Like the men and women of Vichy France who began their collaboration with the Nazis seventy-seven years ago, from now on, every senator and House member of either party who continues to remain silent about this president’s unconstitutional acts is directly complicit in the high crimes and misdemeanors of Donald Trump.

Senator Lindsay Graham already has said that the firing of Attorney General Jeff Sessions would mean the beginning of the end of Trump’s presidency. It is long past time for all of Graham’s colleagues in both houses to declare that the same thing will be true if the president dares to repeat the horrific abuse of his pardon power that we witnessed last night.   Otherwise, America is destined for an era of violence and darkness unlike any we have ever witnessed since the end of the Civil War, one hundred and fifty-two years ago.

All is not yet lost, but the erasing of the rule of law in the United States and the creeping petty authoritarianism of the Trump regime is a threat that we cannot afford to ignore.