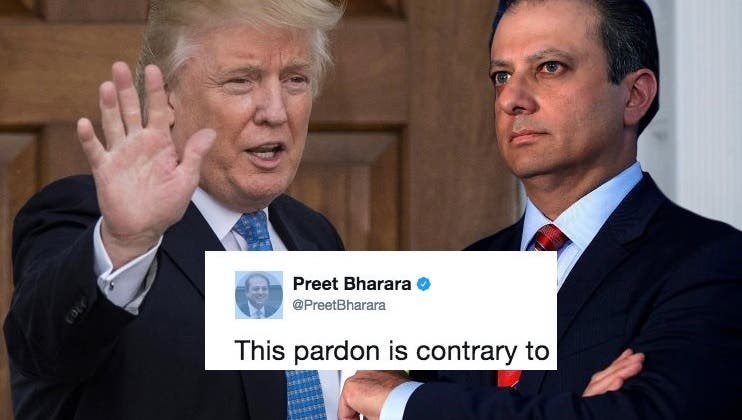 President Trump’s outrageous flouting of the Federal Judiciary with his pardon of the former Maricopa County Sheriff Joe Arpaio for contempt of court has been widely and bi-partisanly denounced as another dog whistle to his white supremacist base.

Now, a distinguished former member of that judicial system, Preet Bharara, the former U.S. Attorney for Southern District of New York, has weighed in with his take on the controversial pardon, and not surprisingly, it’s a devastating critique of the president’s decision with legal analysis and comparisons in a historical context.

Bharara’s initial response to the news was a tweet pointing out how far outside the norms of the Justice Department procedures Trump’s action truly is.

This pardon is contrary to DOJ guidelines, unsurprisingly. Pure politics. Wonder what the pardon attorney's official recommendation was. https://t.co/jErRZiJnxy

Bharara then tweeted a link to exactly what those guidelines are, for those curious enough to investigate the precise standards that the government is supposed to uphold in these types of matters.

Pardons generally only after acceptance of responsibility, long wait after conviction (at least 5 years), rec of US Attorney & judge, etc.

For those who may want a shorter explanation of the rules, the former U.S. Attorney kindly followed up with the Cliff Notes version. As an Obama Administration appointee, Bharara was surely sensitive to the fact that his opinions would be subject to accusations of partisanship, so his next tweet compared Trump’s decision to President Bill Clinton’s controversial pardon of Marc Rich, a fugitive financier indicted for income tax evasion, wire fraud, racketeering, and trading with Iran during the oil embargo (at a time when Iranian revolutionaries were still holding American citizens hostage).

It was when he was asked in a comment whether the president is entitled to ignore the guidelines and recommendations of the Justice Department in issuing pardons, however, that Bharara’s wittiness truly shines, as shown in his next two tweets.

Yes. Every president is entitled to be an ass. https://t.co/tf7yueym27

It is Bharara’s final tweet on the subject that provides some hope and solace in the face of this horrendous miscarriage of justice perpetrated by President Trump with his pardon of the court-flouting sheriff.

Citizens working together are more powerful than US Attorneys. And presidents. https://t.co/cBJRl5go6q

Let’s hope that Bharara is right in that regard and that justice will be served in the end. Perhaps the victims of Arpaio’s criminal contempt, the people who were unjustifiably racially profiled in his lawless attempts to entrap illegal immigrants, can sue him for the damages his actions caused and ensure that he will spend the rest of his life spending a boatload of money fighting civil suits, something that a presidential pardon that only applies to criminal convictions can’t help him with.