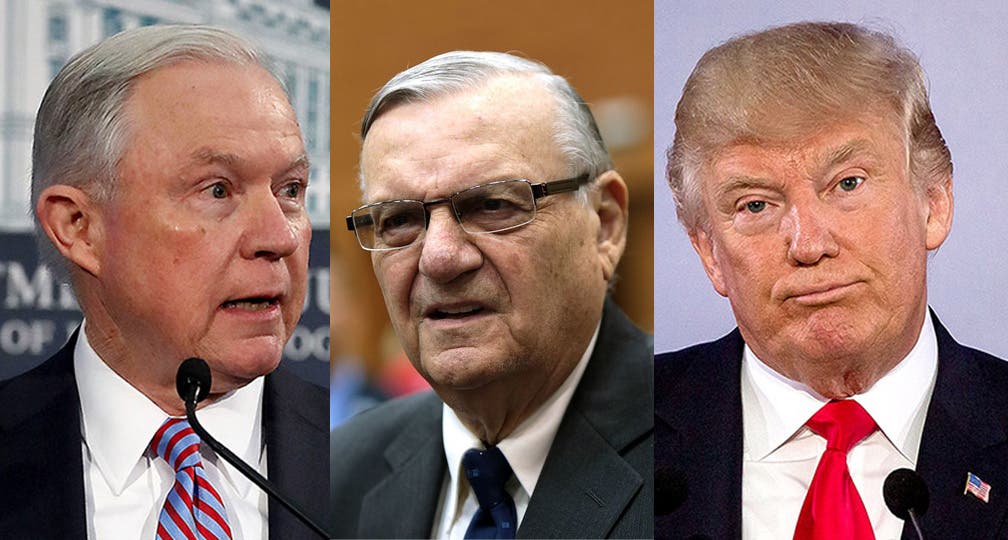 When President Trump pardoned controversial former Arizona Sheriff Joe Arpaio Friday, he set-off a firestorm of backlash from all sides.  Liberals and Democrats predictably admonished the move to liberate the former anti-immigration icon, but Republicans have publicly rebuked the President, too.

The bigger news might not be what Trump did after the federal contempt case against Joe Arpaio concluded – namely pardoning a guilty man – but what he almost did while the racist former law man was still on trial.

According to the Washington Post, President Trump, “asked Attorney General Jeff Sessions whether it would be possible for the government to drop the criminal case against Arpaio, but was advised that would be inappropriate, according to three people with knowledge of the conversation.”

Arpaio was an early and enthusiastic supporter of candidate Donald Trump.  From the first day of his campaign, the New York billionaire articulated a nativist, xenophobic, and explicitly anti-Mexican message that sounded very much like the kind of America “Sheriff Joe” had tried to create in Arizona.  Arpaio even parroted the same “birther” conspiracy theories about President Obama that Donald Trump championed as a private citizen.

And so the pardon itself isn’t surprising.  The way it came about, however, was.  Attorney General Sessions apparently advised the President that killing the trial was legally and politically problematic, if it were even possible.  Trump appears to have relented, knowing he would pardon Arpaio were he found guilty.

As it turned out, he didn’t even wait for sentencing to be handed down.  More from the Post:

“In an extraordinary exercise of presidential power, Trump bypassed the traditional review process to ensure that Arpaio, who was convicted of contempt of court, would face no time in prison.”

The Post adds that “His effort to see if the case could be dropped showed a troubling disregard for the traditional wall between the White House and the Justice Department, and taken together with similar actions could undermine respect for the rule of law, experts said.”

The pardon ended up being Trump’s “backhand way of doing what he wanted to do at the front end,” Robert Bauer, a former White House counsel in the Obama administration, told the Post. “He just wanted to kill the prosecution off. He couldn’t do it the one way, so he ended up doing it the other way. This is just another vivid demonstration of how far removed from an appropriate exercise of the pardon power this was.”