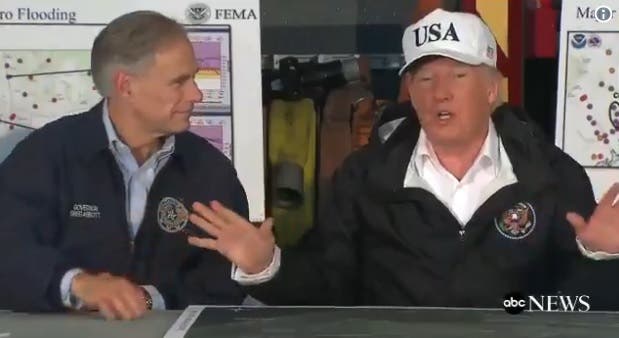 Today, President Trump journeyed to Texas to survey the devastating damage that the Hurricane Harvey has left in its wake – and immediately showed the nation the real reason for his trip.

Far from concerning himself with disaster relief efforts and caring for the people who have lost everything in the catastrophic floods that followed record-breaking rainfall, Trump appears largely concerned with the publicity that his widely touted trip will earn him.

Trump, in Texas, praises his FEMA director as "a man who's become very famous" as a result of Tropical Storm Harvey

Eight people have died and tens of thousands have been forced to flee their homes as the forces of nature’s wrath pummel the city of Houston – but the President of the United States is focused on when he gets to pat himself on the back.

“We won’t say congratulations. We don’t want to do that. … We’ll congratulate each other when it’s all finished” said Trump to conclude his photo-op with Governor Abbott, already dreaming about the applause the right-wing media will shower him with for making a cursory attempt to show sympathy for the plebs.

Trump: "We'll congratulate each other when it's all finished." (via ABC) pic.twitter.com/KmtyvxsTcL

It should not escape notice that the President is actively promoting his own businesses while he’s in Texas, still wearing the “USA” hat that he sells in his Official Trump Campaign Store – for forty dollars. This tells you everything you need to know about our lazy and self-obsessed president.