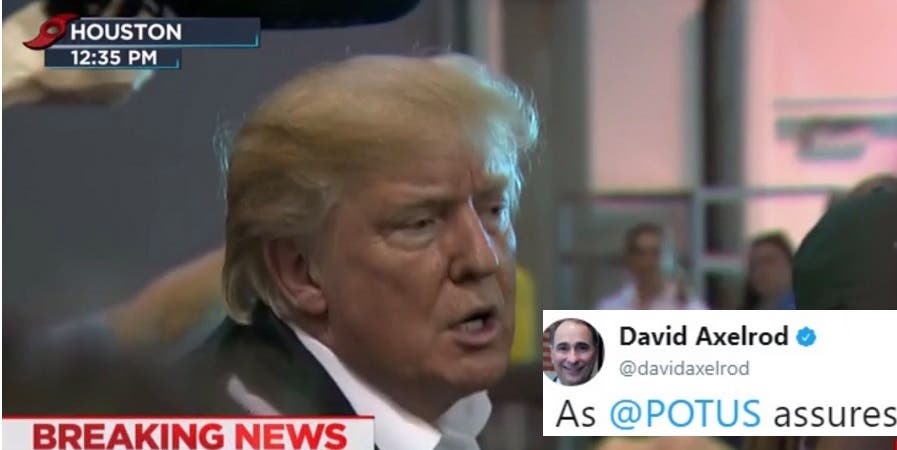 Listening to President Trump, one would be forgiven for thinking that the monumental rebuilding and recovery task facing the state of Texas after the devastation of Hurricane Harvey was going to be a cakewalk.

“They say two years, three years. Because this is Texas, it’s probably six months!” bragged President Trump of the recovery efforts earlier this morning. “There’s a lot of water, but it’s leaving pretty quickly, but there’s a lot of water. It’s been really nice, it’s been a wonderful thing… as tough as this was, it’s been a wonderful thing I think even for the country to watch and the world to watch, it’s been beautiful. Have a good time!”

Trump’s bubbling positivity represent a stunning ignorance of the situation at hand.

40,000 homes have been wiped out by the floods of Hurricane Harvey – and that’s just the beginning of the colossal task facing the people of Texas.

President Obama’s former communications director, David Axelrod, took to Twitter to put Donald Trump on blast for making the situation worse by his efforts to gut the Environmental Protection Agency: At least five of the city of Houston’s “Superfund” toxic waste dumps, described as some of the “most intensely contaminated places” in America, have been inundated with floodwater.

Residents are terrified that the flood waters will allow God-knows-what kind of toxic chemicals to contaminate the surrounding areas – and nobody’s on the scene to assess the situation.

“We will begin to assess other sites after flood waters recede in those areas” said EPA spokeswoman Amy Graham.

In what will come as no surprise, environmental activists have been warning for years about the potential danger that flooding posed to the highly dangerous sites.

But Trump and the fossil-fuel industry lobbyist he appointed to run the EPA into the ground are intent on stripping away all the regulations in place to keep the people of America safe from the toxic byproducts of industry.

Hopefully, the devastation of Hurricane Harvey will prompt a swift reassessment of the Trump administration’s environmental policy. Things could not be further away from “very well,” Mr. Trump.