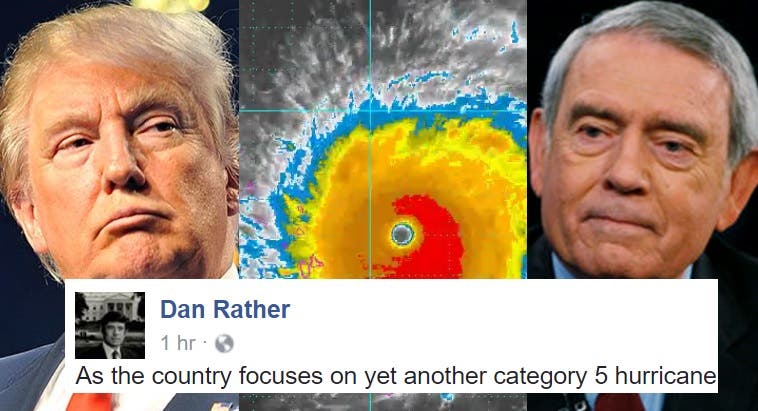 While Republicans across the country and in the White House continue to shove their heads in the sand and deny the threat posed by climate change, Mother Nature has other ideas.

Hurricane Irma, a Category 5 storm with winds that could reach 225 miles per hour, is currently hurtling at staggering speed towards Puerto Rico and Florida. Evacuations have already begun as the most powerful storm on record continues to grow in strength.

Wow. Hurricane #Irma is now expected to *exceed* the theoretical maximum intensity for a storm in its environment. Redefining the rules. https://t.co/e4hPjQt159

Hot on its heels is Tropical Storm Jose, which is expected to grow into yet another nasty hurricane over the next few days.

More bad news: We now have Tropical Storm #Jose in the Atlantic behind #Irma. Expected to become a hurricane in 36-48 hours. pic.twitter.com/pGP3gHLEcI

Renowned newsman Dan Rather took to Facebook for a third time today in order to pose a very serious question to climate-denying Republicans: how many more “record-breaking storms” is it going to take before they do something about climate change?

As the country focuses on yet another category 5 hurricane bearing down on Puerto Rico and the eastern seaboard, we cannot forget those out west suffering under tremendous wildfires – from around the urban districts of Southern California to the plains of Montana. This is also a national emergency, and it could get worse.

Fires and floods, record highs and record wind speeds, The link between any one extreme weather event and climate change is hard for scientists to state with certainty. But the models suggest that as the planet warms, we will see more of this type of activity and at higher levels of ferocity.

We cannot be alarmist, but one can only imagine the screaming headlines and graphics with which the conservative press would be treating these hurricanes, droughts, and fires if they could link climate change to “liberal” policies. How much evidence will we demand before we decide to act? I think we may see Florida as the first battleground state where climate change becomes a defining issue at the ballot box. Hopefully we can recognize that whomever you choose to vote for, we have no option but to live on one fragile planet.

It’s an important question that needs to be answered.
How many record-breaking weather events are we going to endure?
How many tens of thousands will lose everything they own?
How many billions of dollars of damage?
How many devastated cities and how many flooded towns and how many villages washed away?
How many thousands of people will have to drown?
What is it going to take for President Trump and his fossil fuel cronies to face the facts?