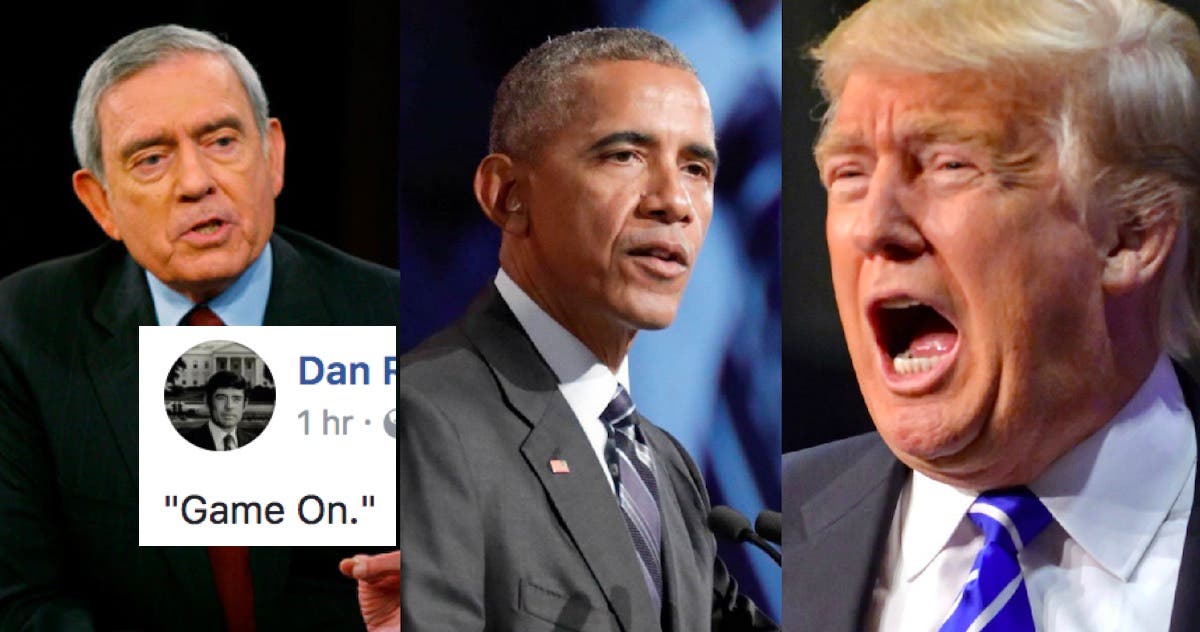 Earlier today, former President Barack Obama gave a heartfelt defense of DACA in light of Trump’s hateful announcement that he would be ending the policy which provides protection to over 800,000 immigrants. Obama’s official statement was a direct challenge to Trump, and caught many Americans by surprise.

Now, veteran journalist Dan Rather has taken to Facebook to put Obama’s response in its proper context.

Throughout the entire Trump presidency, while Democrats and even many Republicans have been howling in anger and disgust, President Barack Obama has been largely silent. That is the usual norms for an ex-president, but as we have seen time and time again, the norms of our democracy are being shattered at a blinding pace.

Make no mistake, the fact that President Obama has weighed in on the DACA decision, and in the way he did through a social media post on his Facebook page that takes direct aim at President Trump and his rationale, is an unprecedented political moment. What will be Mr. Trump’s response? How will this shift the tectonic plates of our national governance? Is it best for the Democrats to have a person who will almost assuredly not hold future elective office be their standard bearer on this? Is this a one-off statement or a re-engagement in the political trenches?

In an unprecedented era, we once again find ourselves on uncharted ground. Mr. Obama has thrown down the gauntlet. We will have to see what happens next.

Here is a quote from Mr. Obama’s post. Read it in full on his page…

“Ultimately, this is about basic decency. This is about whether we are a people who kick hopeful young strivers out of America, or whether we treat them the way we’d want our own kids to be treated. It’s about who we are as a people – and who we want to be.

What makes us American is not a question of what we look like, or where our names come from, or the way we pray. What makes us American is our fidelity to a set of ideals – that all of us are created equal; that all of us deserve the chance to make of our lives what we will; that all of us share an obligation to stand up, speak out, and secure our most cherished values for the next generation. That’s how America has traveled this far. That’s how, if we keep at it, we will ultimately reach that more perfect union.”

Rather is correct that Obama’s move is unprecedented. For a long time, it seemed like the former Democratic president would stand by the time-honored practice of past presidents refraining from criticism of current presidents. He gave Trump time to prove himself, to perhaps – despite all reasonable expectations – rise to the duties and responsibilities of his office.

Instead, Trump has proven himself to be as incompetent as he is sadistic. The repeal of DACA is a heartless betrayal of hundreds of thousands of undocumented Americans. It’s clear that President Obama could no longer remain silent as a reality television star tears our country apart at the seams.