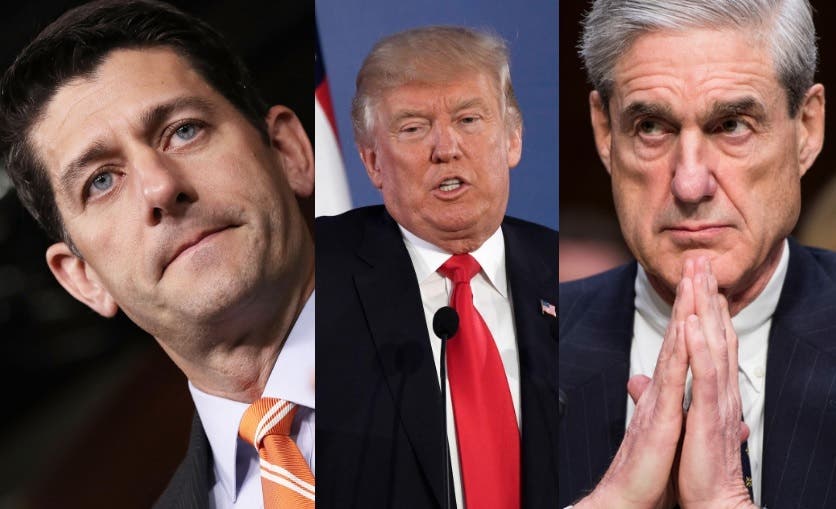 Conflicts among those involved in the Russia hacking probe are giving Donald Trump cover and dragging out the investigations, which is what the president wants.

As the investigations heat up into Russian meddling in the 2016 presidential election and the role of Donald Trump and his campaign in the hacking and any cover up the Senate and House probes are bumping into conflicts with Special Counsel Robert Mueller and his team as they work toward potential criminal charges.

One problem is that the Senate and House committees run by Republicans have held private hearings with former Trump campaign manager Paul Manafort and are soon to hear from Donald Trump Jr. but there are barriers preventing the sharing of what they have learned with Mueller.

Mueller has been urging the House and Senate Intelligence Committees to hold more hearings in public so that he doesn’t have to fight to access the transcripts – which is a problem that has already become a flash point over Manafort’s previous testimony.

When Mueller’s team first requested the Manafort transcript, he told the House and Senate leadership that they had permission to see the private hearing testimony. However, Manafort’s lawyers then insisted they never agreed to that, only to allow Mueller access to the same set of documents that Manafort had given the committees.

According to CNN, that argument has been going on for several weeks, and as a result, the Manafort lawyers have withheld even the documents they promised until all of the conflicting claims are resolved.

The Manafort lawyers have also charged that a pre-dawn raid in July by Mueller’s team on the former campaign managers Virginia home resulted in the seizure of some documents which fall under attorney-client privilege, and should not have been taken. Some apparently have already been returned.

“The previously undisclosed fight,” reports CNN, “described to CNN by multiple sources, underscores the new challenges as congressional committees and Mueller’s operation head into a more intense phase of their parallel – and sometimes, conflicting – investigations into Russian election meddling and any collision with Trump associates.”

While the goal of all three is to find out what happened, their purposes are very different. The Congressional probes could lead to civil action and in theory, even impeachment; where Mueller’s work could result in criminal charges.

While Mueller wants Congress to share what they have learned, at least until now the Special Counsel and his team have not been willing to share much of what their investigation has turned up to date.

All three investigations have shown increased interest in the Trump Organization efforts to build a hotel tower in Russia while the campaign was going on – with an active campaign to get help from the highest levels of the Russian government – which would appear to put the lie to the President’s repeated claims that he had no dealing with the Russians.

Investigators for all three probes want to know what Trump attorney Michael Cohen and former Trump business associate Felix Sater know about those efforts and other involvements with the Russians.

They are all also interested in the activities of the late Peter Smith, a Republican operative who is said to have sought information about Hillary Clinton, including access to hacked emails. After his operations were exposed, Smith committed suicide.

Mueller is to have a copy of a draft memo in which Trump laid out his reasons for firing FBI Director James Comey that was never actually sent. So far, according to CNN, the House and Senate committees have been frustrated in efforts to get a copy.

Others persons of interest to all three probes include presidential son-in-law Jared Kushner, former National Security Advisor Michael Flynn and Roger Stone, a Trump friend and advisor who for a time was involved with the presidential campaign.

While there have been numerous meetings between Muller and the Congressional investigation teams to “deconflict” their efforts, it appears a number of conflicts remain to be resolved.

This is not going to be easy because they not only have different missions but also are driven by different agendas. Muller is a career prosecutor and former head of the FBI who is focused on uncovering everything possible, while the committees are headed by Republicans who know they have to continue down this path but don’t want to hurt their party or its chances in the 2018 mid-term elections.

The conflicts and cross-purposes play to Trump, who insists the whole thing is a “witch hunt” that he wants to go away; or at the very least, that he wants to delay for as long as possible.

In the case of the Mueller probe, if the Special Counsel ultimately does not have enough to convince a grand jury to bring criminal charges, everything he has learned and done may never be made public, which would be very frustrating for those demanding the truth.

There is also the chance that the Republican leaders of the intelligence committees will also bury much of what they find and water down any actions that might be taken as a result of the investigations.

So well the Russia probes are a distraction, Trump can continue to pretend he is innocent and there is no assurance he will ever have to pay any price for whatever happened.

That is the frustrating part of the system, and of American justice, as the investigators, lawyers and politicians all battle for their own agendas and the public wait to see if there will ever be any real justice.