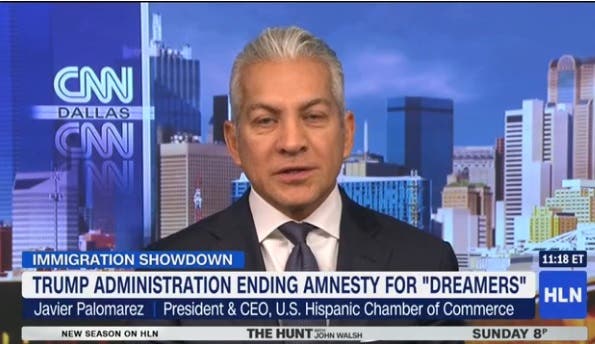 Trump Just Cut The Wages Of 4.2 Million Workers The Day After Labor Day

The backlash to Trump’s bigoted decision to end DACA has been widespread and bipartisan. Americans from the left and right have come out in droves to denounce Trump’s betrayal of 800,000 immigrants who have lived in the United States from birth and know no other home.

Now, Trump’s xenophobic gambit is having direct consequences for him. Javier Palomarez, the president and CEO of the United States Hispanic Chamber of Commerce, has resigned from Trump’s National Diversity Council over his DACA betrayal.

Palomarez made the announcement live on the HLN network, stating, “I officially resign from that council, effective immediately. There is no letter. This is it. This is the resignation.”

He stated that he tried to work with the administration in good faith, but that he sees no logic behind Trump’s decision, adding that the revocation of DACA did not need to happen. He added that he “no longer sees the point” in working with people like Trump and his cronies. His decision to announce the resignation on television, rather than submit a letter, underscores the level of respect he feels for Trump and his administration.

Yesterday, Palomarez threatened to resign if Trump repealed DACA. Now – proving that unlike Trump he is a man of his word – Palomarez has followed through on his threat. The Hispanic Chamber of Commerce is the largest Hispanic business organization in the country, so the resignation comes as a major blow to the Trump regime.