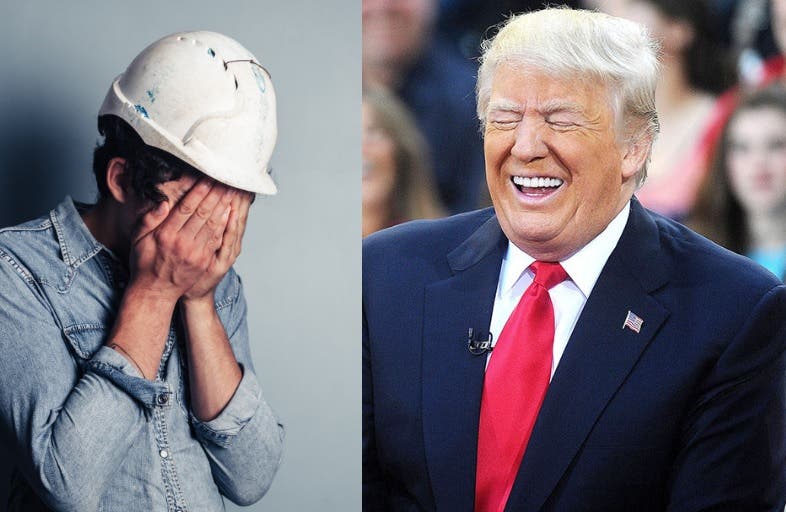 All those white working-class Americans who voted for Donald Trump have a lot more reasons to regret their choice for president after the president once again is siding with companies over the employees at the bottom of the wage scale.

The U.S. Justice Department today said it will abandon efforts to appeal a ruling by a Texas judge that put on hold an order by President Obama that greatly increased the number of workers who should receive overtime pay by making it harder for corporations to pretend they are actually white collar supervisors who are exempt from wage rules.

The impact is that with a shrug and a wink at the big companies,  Trump has slashed the wages for millions of workers, and cost many of them payments due for work already done under the old rules which were enacted under President George W. Bush.

“The Obama overtime rule provided protections to workers who were listed in bogus salaried positons in the service, retail, and other sectors of the economy as a way to avoid having to pay employees overtime,” reporter and lawyer Chris Opfer wrote for Bloomberg BNA.

President Obama pushed the rule when it became clear the Republican controlled Congress would never raise the minimum wage for those in economic terms who are at the bottom of the labor pool.

“President Obama raised wages for 4.2 million workers with this rule,” adds Opfer. “Donald Turmp will slice those wages so that the money can go back into the hands of corporations.”

Trump's DOJ OK w/ no OT for anyone making > $11.38 per hour while he spends millions of your $$ on weekly vacations. #MAGA #Fleeced #grats

The Obama Labor Department rule had doubled the amont of salary a person can make and still be considered a worker and not a boss. Texas Judge Amos Mazzant ruled that the Departmet of Labor had exceeded its authority by doubling the salary threshhold underwhich workers are automatically eligible for overtime pay.

The judge did not rule on the order itself, only on the amount of salary, so it was eligible for further appeal or a rewrite. Under Trump, instead, any improvement is being buried completely.

Once again Trump, who ran as the worker’s friend, is actually the enemy of the working man and the friend of giant, greedy corporations who want to squeeze as much as possible out of each employee and pay them as little as possible.

To pretend someone making $23,500 a  year is actually a manager because they are given a few minor special duties is one of those big lies companies can use to save a few bucks at the same time they pay the CEO a huge salary and send shareholders ever greater dividends.

It’s not that the CEO and stock holders do not deserve what they get, but it is not right to take it out of the pocket of the workers who do the hardest work and make the least money in return.

This is typical of the lies Trump told during the campaign, and contnues to tell, about his support for the working man. The onlly thing he suppoorts are bigger profits for corporations and Wall Street. He doesnt give a damn about low wage workers.

He may have wanted their votes, which he got using lies and deception, but his true colors are exposed in this case more vividly than ever.