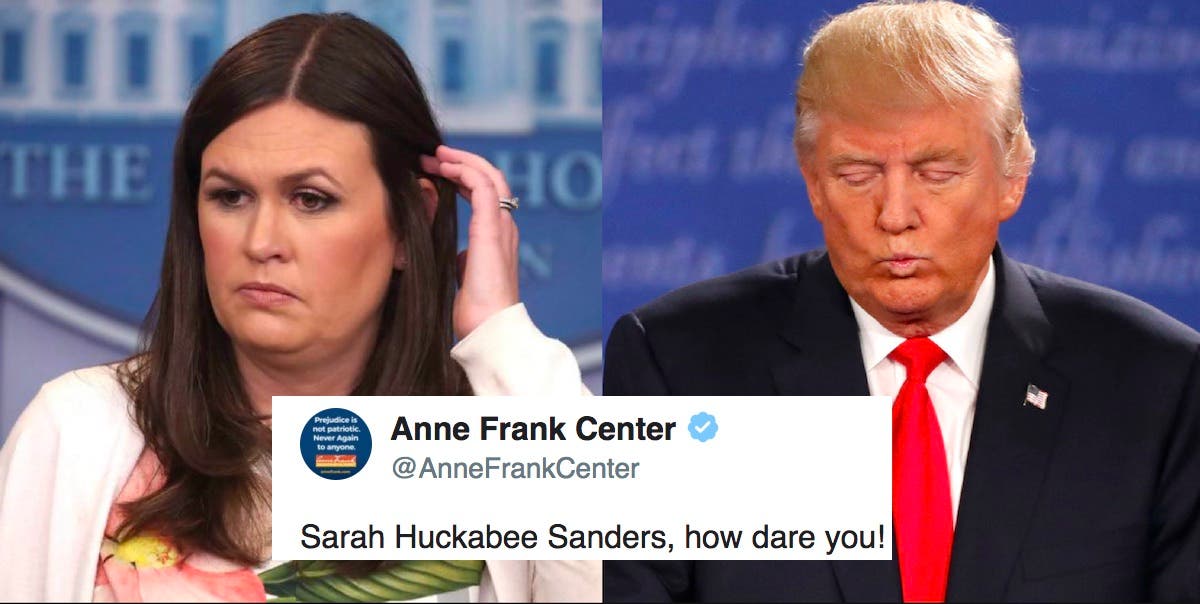 Today, Trump sent White House Press Secretary Sarah Huckabee Sanders out to defend his detestable decision to repeal DACA, betraying hundreds of thousands of people who have lived in America since they were children. The move is a transparent ploy to shore up support with his bigoted supporters, engineered in light of his waning poll numbers and repeated legislative failures.

At one point, she gave a truly stunning comment. “It’s not coldhearted for the President to uphold the law. We are a nation of law and order and the day that we start to ignore the fact that we are that, then we throw away everything that gives these people a reason to want to come to our country,” Huckabee Sanders said. The cruel irony of her words is that Trump has already demonstrated a flagrant disregard for the law by giving a presidential pardon to the racist, convicted Sheriff Joe Arpaio.

Soon after seeing Sanders’s string of disgusting comments, the Anne Frank Center took to Twitter to slam her. The Center has been consistently critical of Trump’s worst, most xenophobic policies.

WE HAVE SEEN THIS BEFORE. A government classifies a people as subhuman based their ethnicity. If you don't see historic parallels, wake up!

We agree with what @BarackObama just said: "To target these young people is wrong because they have done nothing wrong. And it is cruel."

The Anne Frank Center nailed the perfect description of Trump’s DACA betrayal. Sadistic. There is no other word for such a willfully hateful and destructive action. There is no positive side to the announcement. Those living under DACA contribute to taxes and have no criminal records. It’s an economically regressive policy just as much as it is an immoral one. Trump is overtly pursuing a white nationalist agenda and must be denounced at every turn.