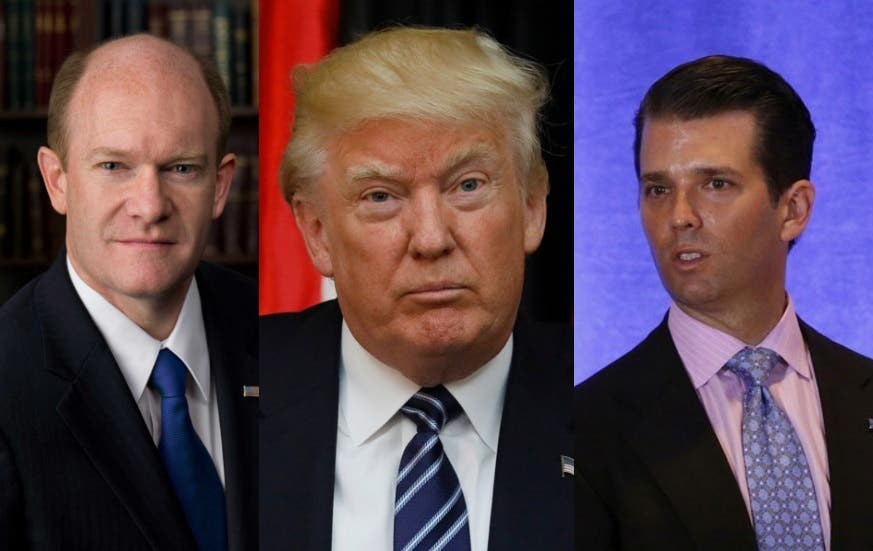 Donald Trump Jr. testified before a Congressional committee today that his meeting with Russian agents on June 16, 2016, came about because he was too overwhelmed and inexperienced to show better judgment.

Although Don Jr. spoke in a private session and was not under oath, he may be too overwhelmed and inexperienced to understand he can be held to every word in his statement before the Senate intelligence committee.

That was the message of a memo sent out today after Don Jr.’s appearance by Senator Chris Coons (D-Del) with a copy of the federal statute that forbids lying to Congress, whether he is under oath or not. Trump Jr. had told the committee that he took the meeting to get information about Secretary Hillary Clinton ‘s character, fitness, and qualifications to be a presidential candidate. He admitted that he may not have exercised good judgment by meeting with agents of a foreign government that wanted to interfere in a U.S. election.

The meeting itself was illegal, which Don Jr. appeared to admit he understood.

“The acknowledgment by the president’s eldest son that he intended to seek legal counsel after the meeting suggests he knew, or at least suspected, that accepting potentially damaging information about a rival campaign from a foreign country raised thorny legal issues,” reports The New York Times, which got a copy of his statement to the committee and published it today.

Coons sent out his warning shot right after the testimony to make sure Don Jr. understood if anything he said was not true, that could also lead to fines and jail time.

False statements to Congress, warned Coons, “are criminal and punishable with fines or prison or both.”

Don Jr.’s meeting with the Russians also continues to be of great interest to the House committee investigating the Russian interference in the election, and to Special Counsel Robert Mueller, who could also ask a grand jury to bring criminal charges against the president’s son.

As the noose tightens around Donald Trump’s neck, Don Jr.’s problems could continue to grow, as could those of other Trump children who have blindly followed daddy down a road that may well lead to their destruction.