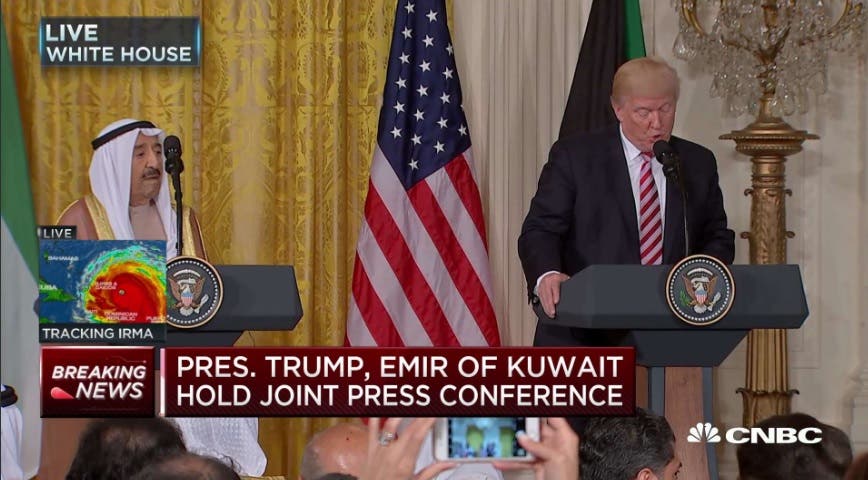 President Trump just held a press conference with the leader of one of our close allies and almost immediately made a fool of himself in front of the world.

He was joined by Emir Jaber al-Ahmad al-Sabah of Kuwait. The two had spent the morning discussing the security situation in the Middle East, the brewing conflict between Qatar and the rest of the Gulf nations, and of course discussing the sale of sophisticated weapons systems to repressive, autocratic regimes.

After carefully reading his prepared remarks, things got immediately tense as Trump attempted to dodge a question about North Korea that would have required him to take a decisive stance one way or another about whether or not he would tolerate a “contained” nuclear-capable North Korea.

When the reporter repeated it, he grew visibly angry and refused to answer the question, arguing that “I’m not negotiating with you” and asserting that he didn’t “reveal his strategies publicly” unlike “past administrations,” which is a shameful cover he’s used to hide his ignorance in the past.

The President followed that up with a discussion of Syria and ISIS, saying that he would be “very surprised” to hear that the Assad regime was still using chemical weapons and that he had no designs in Syria except to “kill ISIS,” which he’s apparently done better in 8 months than the last administration did in the past 8 years.

The militant group known as Daesh began carving out their territory in late 2014, just two years ago, demonstrating Trump’s stunning ignorance of even his favorite subjects. The only thing he’s surpassed past administrations in is the death toll of civilians, which have skyrocketed since Trump took office.

He ended with yet another attack on the media as Kuwaiti emir fielded a question, saying “I’m very glad to hear you have problems with the media too.”

Trump tells Kuwait leader: "I'm very, very honored and happy to know that you have problems with the media" pic.twitter.com/hdS8IYP6Rd

All in all, it was yet another poor showing for the so-called leader of the Free World.