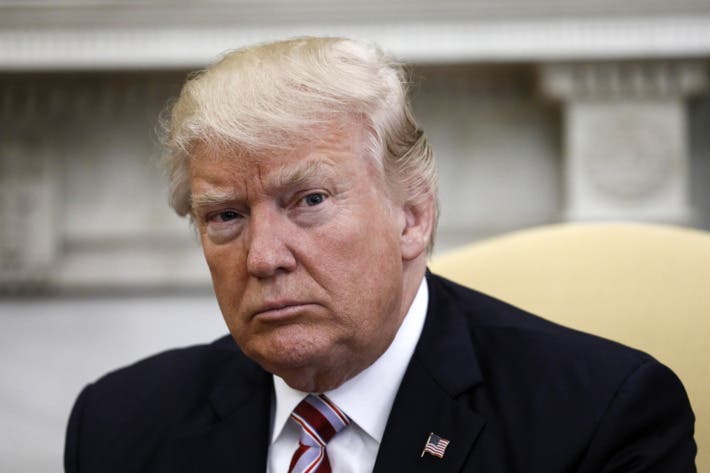 President Trump’s newest White House lawyer, Ty Cobb, is keeping busy picking “on the record” fights with literally anyone who emails him, including respected journalists. That’s how Cobb just got caught spilling the beans to a known e-mail prankster about how bad things are really going for two of Trump’s highest ranking subordinates.

Business Insider’s Natasha Bertrand reported earlier this week that Cobb is a boorish ruffian who not only thinks of highly of himself, but sees himself and Chief of Staff Gen. Kelly as the only adults in the room with Trump. Naturally, the prankster immediately sent Bertrand the emails: 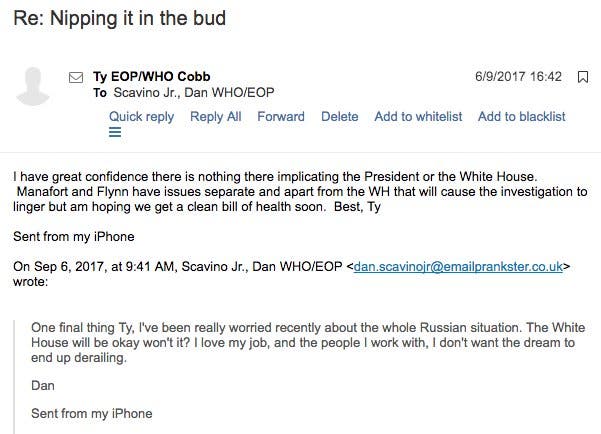 Lawyers usually paint a rosy picture of all parties on their own side of a big case, but Cobb freely admitted to prankster @Sinon_Reborn, who contacted him from the e-mail dan.schavinojr@emailprankster.co.uk, that the investigation into Paul Manafort and Gen. Flynn would continue even if Trump was cleared.

As FBI Director James Comey explained in his June testimony to Congress, that the Trump Russia investigation naturally includes Cobb’s client, Donald Trump, as the head of his own campaign:

“The nature of the investigation was such that it might well touch, obviously it would touch, the campaign, and the person that headed the campaign would be the candidate.”

White House Counsel Ty Cobb has been making all the wrong headlines recently by openly insulting Ms. Bertrand in late night e-mails for asking earnest questions, and fighting with trolls before strangely confiding those very same anonymous people who e-mail him torrid insults late at night.

What makes Cobb’s repeated e-mail blunders so much worse is that the e-mail prankster told the White House lawyer that he had sent a First Amendment-violating, false complaint against Bertrand for breaking these stories.

All lawyers swear to uphold the Constitution and all laws; White House lawyers swear a second oath of public office. However, when WH Counsel Cobb was informed of an illegal, retaliatory act on a journalist by someone he accepted as a coworker, he did the wrong thing.

Cobb thanked the prankster and made a derogatory joke which loses its good humor when you consider the drastic powers people in the government have to use against citizens. He wrote:

The blundersome White House lawyer topped it off by lying to his would-be colleague about having emails that he just didn’t have, and showed a total inability to deal with the press by imagining that public record e-mails from his government official address ty.cobb@who.eop.gov would somehow be private.

“It’s shocking that a White House lawyer with a criminal investigation on his plate is reveling so much in the idea of taking down a reporter,” Business Insider’s Natasha Bertrand told me about the White House lawyer, “Potentially with a drone?!”

What’s also shocking is that Donald Trump cannot seem to find a lawyer with the emotional maturity of an adult, after having let go of attorney Mark Kasowitz for exactly the same undisciplined penchant for blasting stupid e-mails at strangers.

But Ty Cobb’s idiotic missives are far more serious because of his government job at the White House and the authority that brings.

To top it all off, Cobb made a statement that, while on its face sunnily optimistic, ultimately reveals just how deep his client President Trump’s problems really run.

The numerous investigations into Trump’s shady business dealings and Russian political ties run so deep that even Donald Trump’s own government lawyer admits that his highest level co-defendants are going to be stuck in the legal process for their time atop the Trump campaign – in which Trump is complicit – for a long time to come.