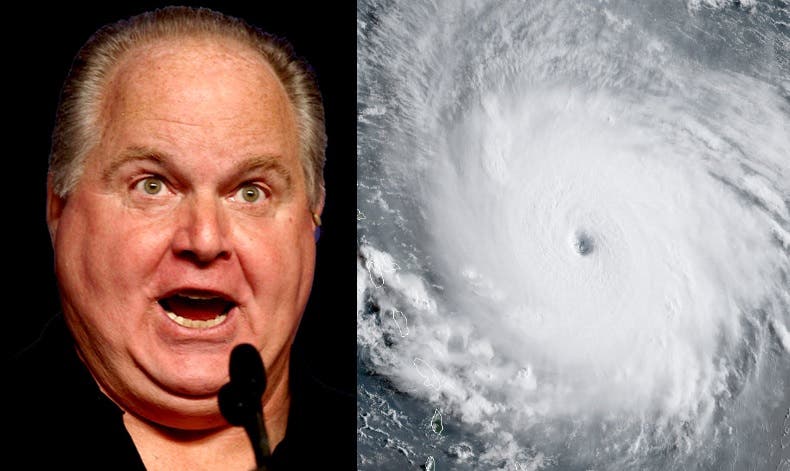 The patron saint of right-wing nutjobs, Rush Limbaugh, has been the subject of much derisive hand-wringing over his breathtakingly irresponsible efforts to claim that liberals and The Media were hyping up the threat of Hurricane Irma as part of their “climate change lie.”

On Tuesday, Limbaugh said the following nonsense on his radio show:

“So there is a desire to advance this climate change agenda, and hurricanes are one of the fastest and best ways to do it. You can accomplish a lot just by creating fear and panic. You don’t need a hurricane to hit anywhere. All you need is to create the fear and panic accompanied by talk that climate change is causing hurricanes to become more frequent and bigger and more dangerous, and you create the panic, and it’s mission accomplished, agenda advanced.”

But of course, Hurricane Irma is a very real and very terrifying thing that is currently barreling towards South Florida with winds of 155 miles per hour – which just so happens to be where Limbaugh lives. Mandatory evacuations have been issued for parts of Florida and Georgia, which might have something to do with Limbaugh’s announcement that he would have to cancel his Thursday show due to, uh, “security.”

“May as well… announce this. I’m not going to get into details because of the security nature of things, but it turns out that we will not be able to do the program here tomorrow. We’ll be on the air next week, folks, from parts unknown.”

But that hasn’t stopped the conspiracy theorist from doubling down on his climate-change denying spiel, reassuring his listeners that “the views expressed by the host of this program [are] documented to be almost always right 99.8 percent of the time.”

Showcasing his renown dedication to being an absolute scumbag, Limbaugh did not tell his fellow paranoid septuagenarians to evacuate or to take any action to protect themselves from an incoming Category 4 hurricane that is bigger than the state of Ohio.

You couldn’t come up with a better metaphor for how divorced far-right conservatism is from reality.