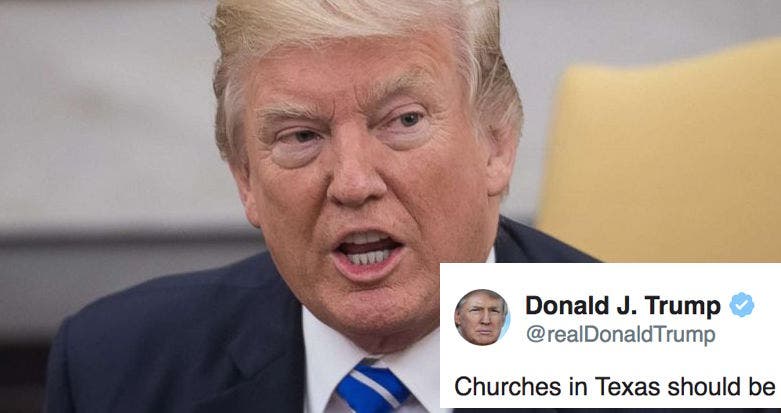 In the aftermath of Hurricane Harvey’s devastation in Texas, Trump made clear his opinion that churches, which are not taxed, should benefit from FEMA relief funds, which are subsidized by American taxpayers.

Churches in Texas should be entitled to reimbursement from FEMA Relief Funds for helping victims of Hurricane Harvey (just like others).

Churches, of course, are tax exempt in the first place because they are supposed to offer public services, like, for example, assisting the community in the aftermath of a hurricane. So while churches may indeed have helped the victims from Hurricane Harvey, making them eligible to receive federal funds when they don’t pay into the system is not only inherently counterintuitive but displays a very tenuous grasp of U.S. fiscal policy.

Trump may have great difficulty reconciling his propensity to pander to the religious right and his party’s commitment to fiscal responsibility, but to endorse essentially paying a tax-exempt church as if it was a for-profit business is certainly not the answer.

Of course, as soon as his misguided comment landed on the internet, social media enthusiastically explained to the President of the United States the error of his ways.

They should get federal tax dollars that they don't pay in to?

Trump would just give federal funds to people like Joel Osteen who laugh all the way to the bank.

Muslims, Jews, and people of other faiths don't even exist in Trump-land, unless it is to promote himself or for a photo-op.

Then they should pay taxes

Joel Osteen better not get one red cent

Send all his FEMA money to Mattress Mack

Unless it's your sellout evangelical buddies that compromised integrity to vote for a sexual predator!

Don't pretend Mr Two Corinthians!!! We see thru you!

what about mosques? And temples? And gurudwaras??

Maybe Trump should stick to his hurricane photo-ops and leave tax policy to those who are even slightly qualified.