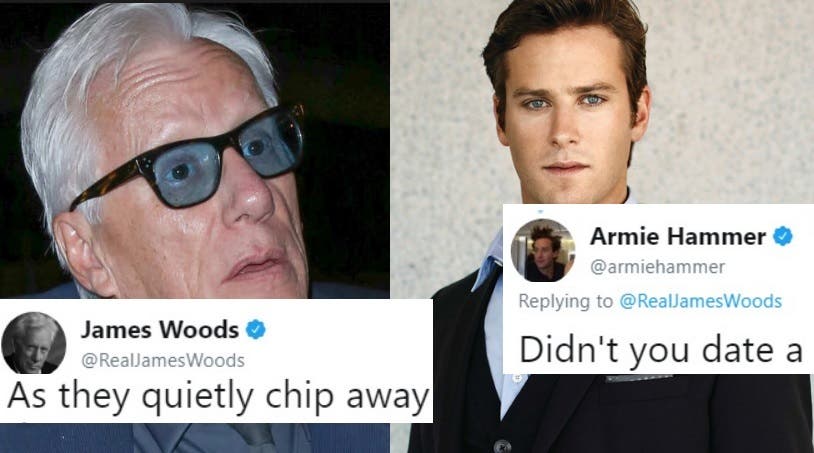 Actor and producer turned prominent conservative social media icon James Woods was thoroughly humiliated today when he tried to cast a homosexual relationship between a 17-year-old boy and a 24-year old man – a fictional relationship from a movie, no less – as morally repugnant.

“As they quietly chip away at the last barriers of decency!” grumbled Woods on Twitter in response to a tweet about the relationship featured in upcoming gay drama Call Me By Your Name. He added #NAMBLA, the acronym for the North American Man/Boy Love Association, a real pederasty advocacy group that is best known for being lampooned on animated show South Park. His homophobic remarks about the depicted relationship blew up in his face, however, when one of the movie’s stars did a little digging and shamed Woods with evidence of his own predatory behavior towards women much younger than he is:

James Woods began dating Ashley Madison when she was just nineteen years old. They split after seven years. His next girlfriend, Kristen Baugness, was 20 years old. He was 66.

The owning of James Woods didn’t end there, however. Actress Amber Tamblyn popped in to share that Woods had hit on her when she was just sixteen years old – and seemed excited by her age.

James Woods tried to pick me and my friend up at a restaurant once. He wanted to take us to Vegas. "I'm 16" I said. "Even better" he said.

It just goes to show how ridiculous the double standard that straight white men are held to is compared to gay men or women who want to date younger partners, who are portrayed as predators while actual predators like James Woods are applauded for being virile bachelors.