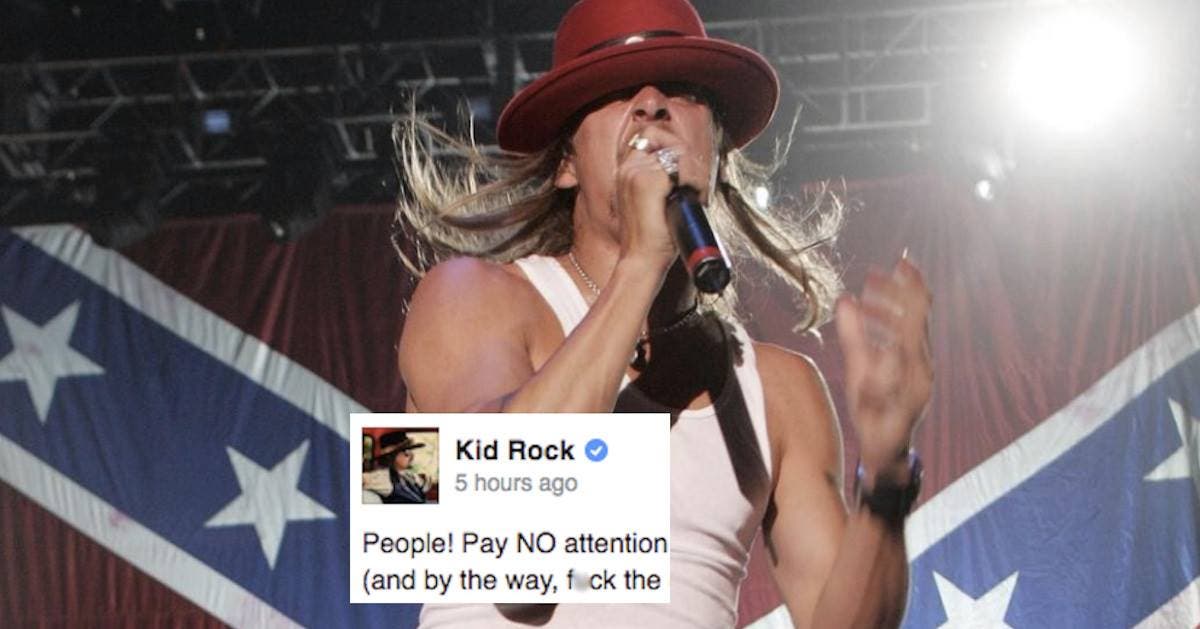 An Investigation Found Trump Lied, NEVER Donated To Any 9/11 Charities

After the Detroit chapter of the civil rights group National Action Network announced they would protest Kid Rock’s upcoming concerts over his past use of the Confederate Flag, the outspoken singer took to social media in especially colorful fashion. 80% of Detroit residents are black, so it’s no wonder that they would take exception to Kid Rock’s use of a flag that symbolizes a celebration of slavery and treason against the United States.

Rather than show humility, Kid Rock attempted to defend the indefensible in his Facebook rant, implying that because he owns a house in Detroit, he deserves to express himself there as he sees fit without criticism from black people offended by the hate symbol.

Multiple times, he contradicted himself.

He attacked Detroit political consultant Sam Riddle for speaking out against the Detroit Red Wings’ hypocrisy for expressing offense at Charlottesville Neo-Nazis’ use of their logo, but letting Kid Rock use their stadium to wave the Confederate Flag. Yet he mysteriously asked, “Has Al Sharpton even paid his back taxes yet?”  Perhaps he meant to say that because Al Sharpton hasn’t paid back taxes, Democrats shouldn’t ask about President Trump’s as-yet unrevealed tax returns. Or perhaps he just meant to contrast himself by saying he pays taxes in Detroit and Sharpton doesn’t, despite Sharpton residing in New York City.

Rock moved on to hurl an epithet at football player Colin Kaepernik: “F*** ANYONE who takes a knee or sits during our national anthem!”  But, as if to defend himself against accusations of racism, he ended his screed, “P.P.P.P.P.S. I LOVE BLACK PEOPLE.”

Actions speak louder than words, Mr. Rock. If you “love black people,” why don’t you show it by not waving a hateful symbol of oppression at your concerts?