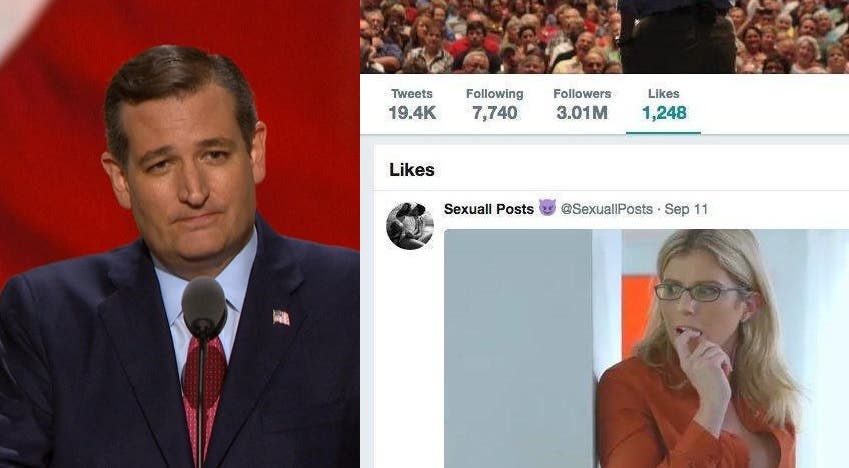 Senator Ted Cruz (R-TX), America’s most aggravating social conservative, has become a laughingstock after it was discovered late last night that his Twitter account had “liked” a hardcore pornography video.

Within an hour, “Ted Cruz” was trending worldwide and nearly half a million tweets about the gaffe have been sent. The public response would have been severe no matter what, but Cruz made it so much worse by having established strong anti-masturbation, anti-pornography, and anti-sex toy stances in the past.

This morning, Cruz’s camp gave the excuse that we all could have predicted. The bane of political campaigns and corporate social media alike, it was to be the Nameless Intern who was responsible for this.

He even tried to make a joke about the incident.

“This was not how I envisioned waking up this morning. Although, I will say that if I had known that this would trend so quickly, that perhaps we should have posted something like this during the Indiana primary.”

It is very interesting that they ruled out the “hacking” excuse that is the usual go-to in these kinds of situations. When one considers the fact that it was late at night, and Ted Cruz himself was on a business trip to Israel, you have to wonder…

There’s nothing wrong with watching pornography; in fact, accidentally leaving evidence of late night searches might be the most relatable thing he’s ever done.

But that doesn’t mean that the man who leads the Republican crusade against LGBT rights and women’s access to safe reproductive health doesn’t deserve to be dragged for the next week and a half.