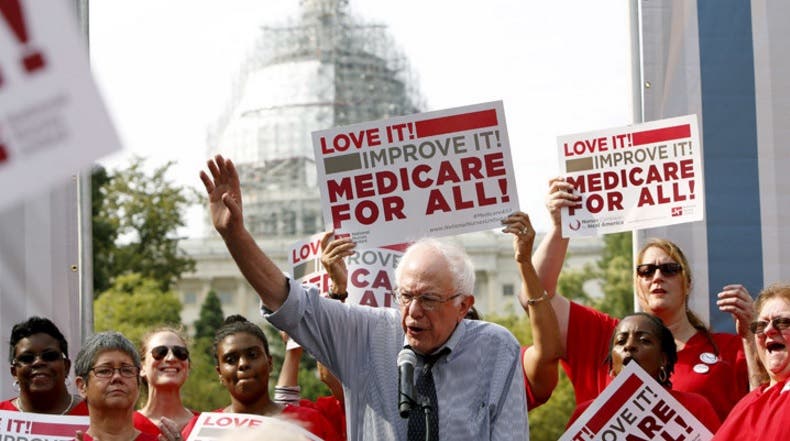 Today, Senator Bernie Sanders (I-VT) introduced the Medicare For All Act alongside a historic fifteen co-sponsors in the Senate, including nearly every Democrat currently mulling over a run for the Presidency.

To accompany his groundbreaking legislation he wrote a powerful op-ed in the New York Times in which he makes his case to the American people about why we need to transition to a single-payer healthcare system as soon as possible.

He lays his case out with his characteristic bluntness, simultaneously articulating both a moral and an economic argument for ridding ourselves of the exploitative, inefficient, and needlessly cruel healthcare system we have now and replacing it with the free healthcare that we deserve as a right by the simple virtue of our shared humanity.

This is a pivotal moment in American history. Do we, as a nation, join the rest of the industrialized world and guarantee comprehensive health care to every person as a human right? Or do we maintain a system that is enormously expensive, wasteful and bureaucratic, and is designed to maximize profits for big insurance companies, the pharmaceutical industry, Wall Street and medical equipment suppliers?

We remain the only major country on earth that allows chief executives and stockholders in the health care industry to get incredibly rich, while tens of millions of people suffer because they can’t get the health care they need. This is not what the United States should be about.

Sanders moves on to describe the harrowing stories of human suffering that our appalling healthcare systems produces on daily basis – stories of senior citizens forced to split their pills in half because they can’t afford more, parents forced to choose between their own healthcare and that of their children, countless people who have simply died because they can’t afford for their healthcare.

But not only is a Medicare-for-all system the morally righteous thing to do, it’s also economically beneficial because it acknowledges a fundamental truth – healthcare is expensive and cannot humanely operate as a for-profit system.

The reason that our health care system is so outrageously expensive is that it is not designed to provide quality care to all in a cost-effective way, but to provide huge profits to the medical-industrial complex. Layers of bureaucracy associated with the administration of hundreds of individual and complicated insurance plans is stunningly wasteful, costing us hundreds of billions of dollars a year. As the only major country not to negotiate drug prices with the pharmaceutical industry, we spend tens of billions more than we should.

The current healthcare system is a for-profit monstrosity that destroys lives and condemns tens of thousands of innocent people to early deaths by preventable causes while funneling our hard-earned tax dollars into the pockets of health insurance stockholders.

This is beyond reprehensible and while the Affordable Care Act was a godsend to millions of Americans, the fact is that it is ultimately a compromise that artificially props up a predatory and heartless insurance industry whose primary concerns are their bottom lines and not the well-being of the American people.

And while the Democratic Party should embrace this plan not because of politics but because it’s the morally right thing to do if you care about the American people, it also happens to be politically popular and would represent a very powerful offering to the American people.

Now is the time for Congress to stand with the American people and take on the special interests that dominate health care in the United States. Now is the time to extend Medicare to everyone.

America is at a crossroads, and so is the Democratic Party. Unless the Democrats would like to accompany the Republican Party on their slide into irrelevance, it’s time to ditch the centrist incrementalism and offer some real, substantial change that appeals to every American and is easily understandable by the average voter – not means testing and expanded tax credits.

It’s time for America to join the rest of the developed world and offer publicly-funded healthcare for all of their citizens. It’s the right thing to do.