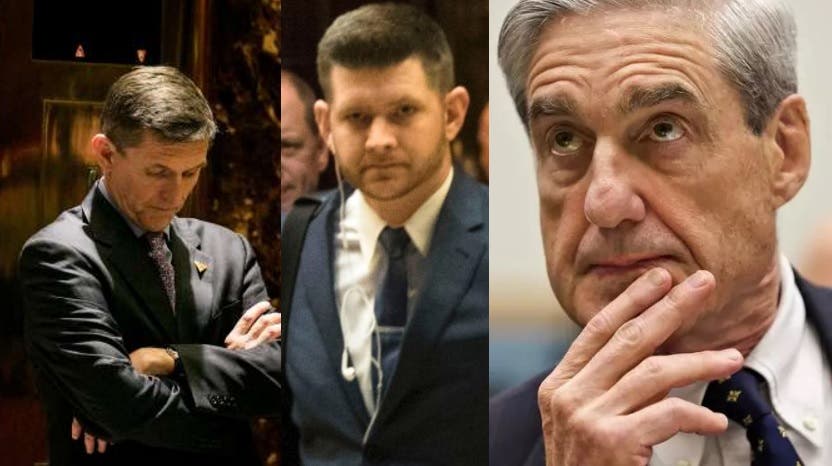 The Trump-Russia probe is turning into quite the father/son affair with the news that another child of a senior ex-Trump Administration official is now being investigated by a federal probe.

Four current and former government officials told NBC News that Michael G. Flynn, the son of Trump’s disgraced National Security Advisor, is under investigation in Special Counsel Robert Mueller’s probe into the Trump campaign team and their alleged collusion with agents of the Russian Federation.

Flynn Jr. became best known for being a vocal proponent of pushing the #pizzagate conspiracy theory that accused Hillary Clinton and her campaign chair John Podesta of running a secret Satanic child-sex ring in the basement of a D.C. pizza shop. His fondness for the outrageous hoax ended up costing him both his security clearance and a White House job.

The inquiry into Flynn is focused at least in part on his work with his father’s lobbying firm, Flynn Intel Group, three of the officials said. It’s unclear when the focus on Flynn began. The younger Flynn worked closely with his father, whose connections to foreign governments, including Russia and Turkey, have been a subject of federal and congressional investigations.

Michael G. Flynn accompanied his father, for instance, on a trip to Moscow in December 2015 for the elder Flynn to deliver a paid speech at a gala for the state-sponsored Russian television network RT. He can be seen in video from an associated event.

The Trump Administration’s many alleged misdeeds include numerous crimes committed by the fathers, Donald Trump and Michael Flynn, but their sons’ key role in their family affairs has taken center stage as investigators turn their focus on Flynn Jr. and seek to unravel Donald Trump Jr.’s misleading statements.

Former federal prosecutors and legal experts say that it’s not uncommon to target family members suspected of being involved in crimes because it increases pressure on all sides to cut a deal.

What makes the Flynn Jr. and Trump Jr. investigation unique is that both men obtained their high ranking political positions through nepotism, and neither held any qualification or had any relevant experience in their jobs.

Flynn Jr. has an associates degree in golf course management and a Bachelor’s degree from a North Carolina University. Trump Jr. worked in his father’s real estate development company and claimed to Congress last week that his own ignorance excused betraying his country by seeking Russian dirt on Hillary Clinton during his father’s election campaign.

The Trump Administration is about to get a first-hand lesson about the damaging effects that nepotism can have in national security and foreign affairs management.