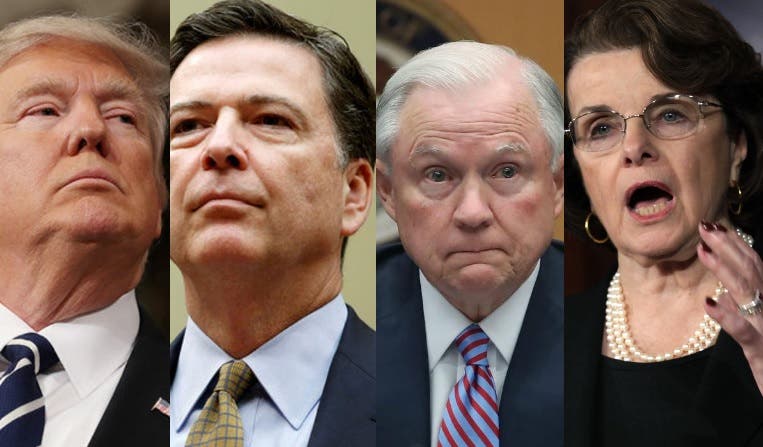 Since President Trump took office, the Department of Justice has abandoned all pretense at enforcing “justice” and ethical conduct but instead has become the personal enforcer of his vindictive, prejudiced agenda.

Under the control of Trump’s malicious pet toad, Attorney General Jeff Sessions, the Department of Justice is now openly interfering in the Senate’s investigation of President Trump and the allegations of collusion with the Russian Federation in order to tilt the 2016 election in Trump’s favor.

Senate intelligence officials have revealed to CNN that the Department of Justice is refusing to allow Senate investigators to interview two top FBI officials who could “provide first-hand testimony” of the circumstances surrounding Trump’s firing of FBI Director James Comey.

Senate Judiciary Committee leaders Sen. Chuck Grassley (R-IA) and Sen. Dianne Feinstein (D-CA) have been pushing for top FBI officials Carl Ghattas and James Rybicki to tell their accounts of the Comey firing, but the Department of Justice is giving empty excuses:

“Under these circumstances and consistent with the Department’s long-standing policy regarding the confidentiality and sensitivity of information relating to pending matters, the Department cannot make Mr. Ghattas nor Mr. Rybicki available for transcribed interviews at this time.”

Comey was abruptly fired on May 9th after President Trump realized his clumsy efforts to bully the FBI Director into backing off on the Trump-Russia investigation failed. Comey’s testimony before the Senate Intelligence Committee and the revelation of secret meetings between him and President Trump make a strong case that the President obstructed justice in attempting to derail the investigation.

In early September, the existence of a never-released letter detailing his reasons for firing Comey, written by Trump, was made public. The problematic nature of the letter’s contents, which is in the hands of Special Counsel Mueller, make it clear that not only was President Trump’s original justification for the Comey firing a lie.

The testimony of these two top FBI officials with firsthand knowledge of the events leading up to the Comey firing could be crucial to the obstruction of justice case against President Trump – but his lackeys in the Department of Justice are doing everything they can to protect him.