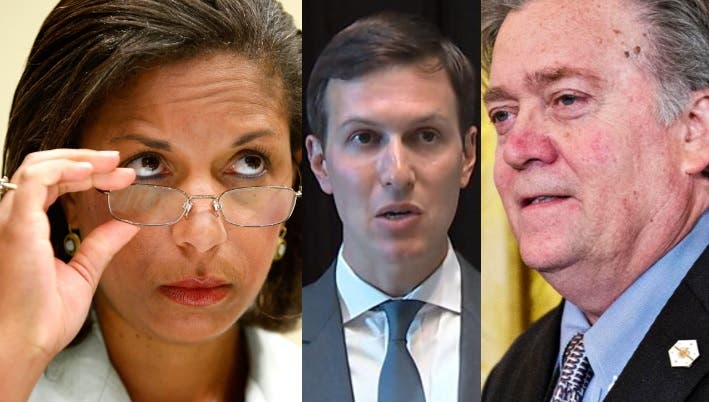 President Obama’s former National Security Adviser, Susan Rice, just revealed why she unmasked – internally identified – the identities of Trump administration officials last year, a move that was seized upon by the conservative media as evidence of a liberal conspiracy against Trump but now appears to be evidence of a conspiracy by the Trump camp to establish a backchannel with the Russians.

CNN reports that the unmasking was prompted by the crown prince of the United Arab Emirates Sheikh Mohammed bin Zayed al-Nahyan’s unannounced visit to New York in December 2016, shortly after the election.

The crown prince did not inform the Obama administration that he would be visiting the United States, so the suspicious National Security Adviser did her job and engaged in some entirely legal snooping to figure out what he was up to.

Rice, who served as then-President Obama’s national security adviser in his second term, told the House Intelligence Committee last week that she requested the names of the Americans mentioned in the classified report be revealed internally, a practice officials in both parties say is common.

Rice’s previously undisclosed revelation in a classified setting shines new light on a practice that had come under sharp criticism from the committee chairman, California Rep. Devin Nunes, and President Donald Trump, who previously accused Rice of committing a crime.

When one considers the fact that the United Arab Emirates brokered a meeting between Trump envoy Erik Prince and an unknown Russian envoy in the Seychelles in order to set up a secret back-channel between Trump and Putin, it’s very clear that Rice was right to trust her instincts and find out what was really going on.

The incomplete reporting of the unmasking story by Bloomberg‘s Eli Lake set off a firestorm of conservative conspiracy theories related to President Trump’s widely debunked and never withdrawn accusation about being illegally wiretapped by President Obama.

Now it’s clear that while Rice’s “unmasking” of the Trump officials was related to a conspiracy – the efforts by the Trump team to establish a secret back channel to the Russians for whatever nefarious purposes they wanted it for.