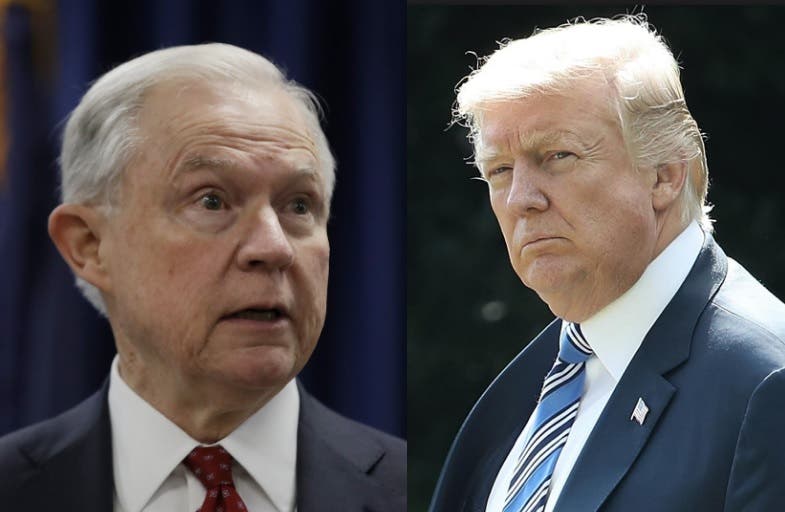 Is American’s top law enforcement official a liar or is he just trying to hide the truth about his contacts with Russians?

That is the question being raised in a new lawsuit.

The fact is Attorney General Jeff Session lied during his confirmation hearing before a Senate committee by denying multiple contacts he had while still a Senator with Russian government officials. He also omitted those contacts when he applied for a government security clearance.

Sessions – who had to recuse himself from participation in the Russia election hacking investigation and the Trump campaigns involvement –  claimed on May 24 to CNN, through Sarah Isgur Flores, a spokesperson for the Justice Department, that he omitted the meetings with Russians  because he was told by the FBI that he did not need to include that vital information.

Trump and Sessions’ credibility is so low that this claim raised questions. So on June 1, Right Wing Watch, a project of the non-profit People For The American Way, submitted a Freedom of Information Request to the Justice Department and FBI for documents or proof that Sessions was in fact given those instructions.

Right Wing Watch applied for expedited handling of its FOIA requests. After that was initially denied, it appealed, and eventually, the group was granted a fast track on July 25.

That gave the FBI about 20 days to respond, but the time period came and went without any response.

So yesterday, People For The American Way (PFAW) filed a lawsuit in the U.S. District Court in Washington claiming the FBI is “wrongfully withholding” the information and demanding that it be produced immediately.

“The FBI has acknowledged that Right Wing Watch’s FOIA request is of urgent public importance,” said PFAW President Michael Keegan in a statement, “yet has failed to produce the required documents in the time required by law.”

After omitting his contact with the Russians on his security clearance form and before Congress, Sessions “was forced to backtrack each time when that was shown to be false,” said American Oversight Executive Director Austin Evers. “After that lie, no one should take Jeff Session’s word about what the FBI instructed him, especially where those instructions have directly contradicted the text of the security clearance form itself.”

American Oversight, a nonpartisan, nonprofit ethics watchdog related to force administration officials to be accountable, joined the suit along with PFAW, according to Evers, who is a former general counsel at the U.S. Department of State.

Keegan emphasized the importance of full disclosure by the administration in light of the “investigation for possible improper contacts with representatives of Russia’s government.”

“It is imperative,” added Keegan, “for the American people to know whether the attorney general is speaking accurately about omissions in his security clearance form.”

Evers also made reference to statements by Sessions – including justification for ending the DACA “DREAMers executive order – to the need to follow the letter of the law.

“The Attorney General likes to talk about the importance of law and order,” said Evers, adding that they are now “happy to oblige.”

PFAW was first created in 1980 by producer and political activist Norman Lear in response to efforts by religious groups known as the Moral Majority to influence government policy, and since has grown into an advocacy organization that addresses a range of misdeeds by the government and elected officials, does research into other abuses by public officials and provides educational and informational material.

It continues to play an important role in keeping the government honest, especially in the midst of the Trump administration, which is among the least transparent in the history of the republic, and one which has repeatedly been caught lying or misrepresenting the truth.

That was among the questions Rachel Maddow raised on MSNBC this week, in a segment that included the PFAW lawsuit.

Calling out Sessions, who plays a key role in Trump’s efforts to roll back Justice Department efforts to protect all citizens, rich and poor, is another positive step toward bringing sunshine into the darkness that surrounds much of what the administration does.

If the FBI, in reality, while still run by James Comey, did instruct Sessions to withhold critical information that relates to the investigation of Russian hacking of the 2016 presidential election, it seems to be in Trump’s interest to bring the facts to light.

If Sessions and the president are keeping this a secret – or are lying –  it only adds to the impression that there is a lot more to Trump’s involvement in the Russian interference int he election than what has come to light so far.

It would also be interesting if the FBI will document the Trump claim to hear how Comey and the FBI justify this instruction to lie on government documents in sworn testimony before Congress, which could lead to a lot of other questions.