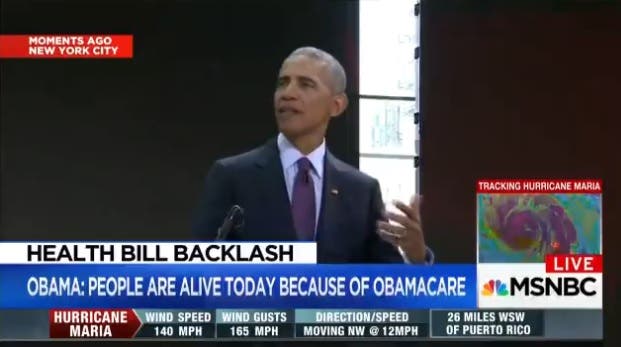 At an event today for the Melinda and Bill Gates Foundation, President Obama roundly condemned the Republican Party’s latest effort to repeal his signature healthcare law and destroy the Medicare program.

Dubbed the “Graham-Cassidy bill” after the heartless Republican shills who sponsored the bill, the legislation would turn the funding for Medicare programs into block grants for the states to use as they wish, accompanied by unsustainable cuts in funding and caps that would hit blue states the hardest.

President Obama expressed his frustration with the third major Republican effort to destroy his legacy, upend the health insurance industry, and deprive millions of Americans of their healthcare.

“When I see people trying to undo that hard-won progress, for the 50th or 60th time, with bills that will raise costs, reduce coverage and roll back protections for older Americans and people with pre-existing conditions … it is aggravating.

It may be frustrating that we have to mobilize every couple months to keep our leaders from inflicting real human suffering on their constituents. But typically, that’s how progress is won.”

He followed that up with a favorable endorsement of universal healthcare:

“You people in countries that already have universal health care are wondering, ‘What’s the controversy?’ I am too.”

Obama: Those who already have universal healthcare are "trying to figure out, what's the controversy here? I am too" https://t.co/HlcAZEEyG3

As the Republican Party slides so far to the right that even the basic concept of for-profit health insurance is considered “socialism,” it’s time for the Democratic Party to go the other way and embrace Senator Bernie Sanders’ Medicare For All bill and make universal single-payer healthcare a central plank of their political platform.

After the callous disregard that the Republicans have shown for the health of their constituents time and time again over the past few months, there’s a major opening for Democrats to step into. It’s time to dream of a better future and offer something more substantial than lower premiums and earned income tax credits.

It’s time we joined the rest of the developed world and gave our citizens the free healthcare they deserve.