In an utterly bizarre and disgraceful attempt to justify his abhorrent decision to abandon our Kurdish allies to Turkish tank treads, Trump complained in public remarks today that the Kurds somehow deserved it because…they didn’t help us in the Second World War.

Goes on to say the Kurds are only interested in fighting for "their land" before adding: "With all that being said, we like the Kurds." pic.twitter.com/hOg37hf0N8

The unrecognized and divided land of Kurdistan stretches from southeast Turkey, northwest Syria, northern Iraq, and western Iran. None of those places are anywhere near Normandy or Vietnam. 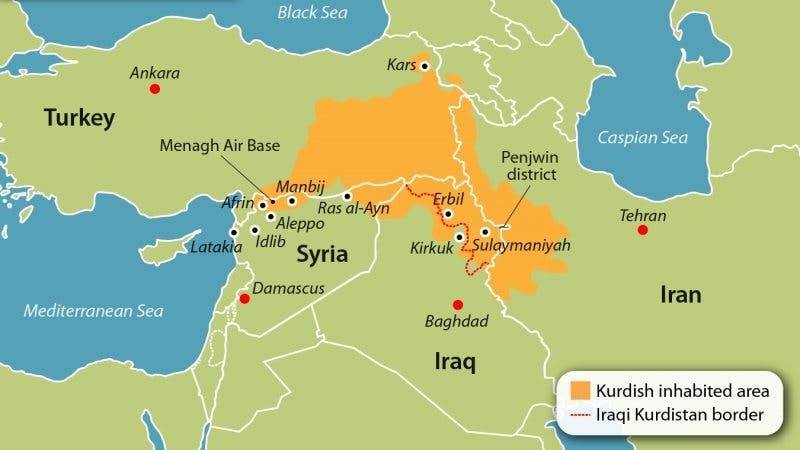 This entire discussion is absolutely absurd. While it’s par for the course for Donald Trump to victim-shame the recipients of his abuse, for him to seemingly blame the Rojavan Kurds for their own invasion because they didn’t help us during the Second World War is just insanity.

While in Trump’s world, everything is part of a quid pro quo that benefits himself, the United States stands for different principles, and the Founding Fathers would weep at seeing our values of supporting democracy and our friends being mortgaged by Trump because he feels they haven’t fulfilled some preposterous debt to us — which they absolutely have done ten times over by liberating the majority of northern Syria from ISIS! WHICH HE TAKES CREDIT FOR!

Of course, he didn’t come up with this idea himself. Daily Beast jounalist Will Sommers discovered that the idea originated in a column by right-wing racist blowhard Kurt Schlicter, who shamefully reduces the many years spent and tens of thousands of lives lost by the Kurdish YPG in their fight to cleanse northern Syria of the ISIS menace to “would have fought them anyway.”

Trump appears to have gotten his "Kurds didn't help us at Normandy" line from a Kurt Schlichter column. https://t.co/jAbsP9VCQt pic.twitter.com/6HknvoZ0gl

The idea that the southeast-Turkey based Kurdistan Worker’s Party (the PKK) and the northern Syria-based Kurdish Democratic Union Party (PYD), along with its People’s Protection Units (YPG/YPJ) are one and the same is a Turkish government talking point used to justify the use of oppression, violence, and ethnic cleansing against both groups.

The PKK have been waging a separatist war against the Turkish government for decades, and while they have committed some terrible acts of terrorism against mainly Turkish military targets, the Turkish government and the far-right ultranationalist terror group that calls itself the “Gray Wolves” have committed unspeakable mass killings of Kurds and other ethnic minorities on and off since the end of the Armenian genocide.

It is beyond any kind of rational comprehension of why Trump would think this was a valid argument to justify one of the worst betrayals in American military history, but it’s clear that as his impeachment proceedings unfold, he’s losing all semblance of his sanity and all pretense at caring about America’s place in the world.