As the behemothic Turkish military rolls into Northern Syria determined to exterminate the brave men and women of the Kurdish-led Syrian Democratic Forces (SDF), the American president has already set about smearing the people we swore to protect. Trump’s decision to withdraw the bulwark of American forces from between Turkey and the region opened the door for the invasion and is already resulting in innocent deaths. This tragedy will prove to be a stain not only on his own personal vile legacy but on the history of the United States as a whole as well.

Reports are pouring in as the military campaign escalates and things already look grim. Fox News’s Jennifer Griffin has taken to Twitter to share a conversation she had with a U.S. Special Forces soldier who is currently serving in Syria alongside the Kurds. He has been part of American efforts to train the local forces and told her that he feels ashamed for the first time in his career.

“Turkey is not doing what it agreed to, it’s horrible,” the source told Griffin, revealing that he and his comrades in arms are already witnessing Turkish atrocities on the frontlines. He went on to explain that Kurdish forces met all of their obligations under their security agreements and do not pose a real threat to Turkey.

“This is insanity,” he said. “I don’t know what they call atrocities but they are happening.”

One can only imagine the horrific stories that will emerge in the coming but they will certainly involve the deaths and mutilation of not only SDF soldiers, but women and children as well.

The Special Forces soldier went on to explain that the Kurds are remaining brave in the face of Trump’s betrayal. Some of them have remained to defend prisons holding ISIS prisoners even as the Turkish forces approach.

“They prevented a prison break last night without us,” he explained. “They are not abandoning our side yet,” he went on. Heartbreakingly, he said the Kurds are “pleading” for American support but the U.S. is doing “nothing.”

Inevitably, the conversation came around to Trump and the soldier didn’t mince his words.

Unfortunately, stories like this are just going to keep piling up unless Congress takes action to undo Trump’s massive and cruel blunder. Lives are at stake and the time for action is now. America cannot abandon her allies, the very soul of the nation is at stake.

I just spoke to a distraught US Special Forces soldier who is among the 1000 or so US troops in Syria tonight who is serving alongside the SDF Kurdish forces. It was one of the hardest phone calls I have ever taken.

"I am ashamed for the first time in my career." 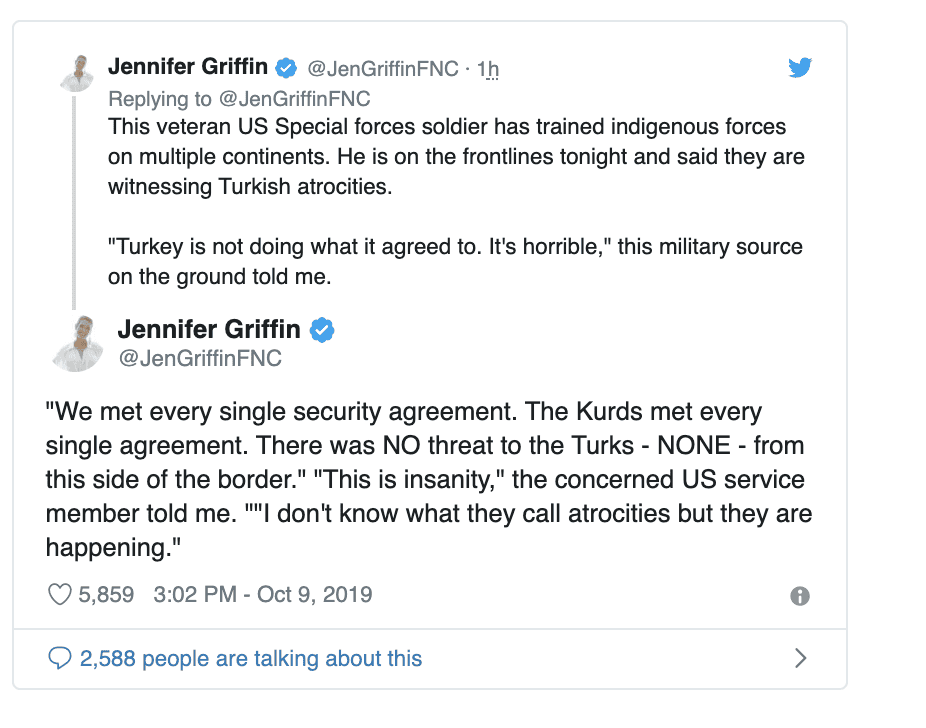 This US Special Forces soldier wanted me to know: "The Kurds are sticking by us. No other partner I have ever dealt with would stand by us."
Disappointed in the decisions coming from their senior leaders.