By the look of it, Donald Trump had a rough morning. The president clambered out of bed and rather than focusing on any of the myriad affairs of state entrusted to him, shot out ten aggrieved tweets, hitting his followers with a rambling, incoherent string of consciousness.

The president started the tweetstorm by claiming that, contrary to a new report from The Washington Post, Attorney General William Barr did not refuse his demand for him to hold a press conference to exonerate Trump over his now-infamous Ukraine call.  Allegedly, Trump requested through a string of intermediaries that Barr tell the public that he didn’t break any laws during the call.

Trump called the report a “Fake Washington Post con job” and insisted that the Post’s source doesn’t even exist. He then told his followers to “read the Transcript” which he keeps doing, presumably because he thinks his supporters are too lazy to do it. If they did, they’d see his guilt laid out plainly in black and white, with him asking the Ukrainian President for the “favor” of opening a damaging investigation into Joe Biden ahead of the 2020 election.

He stated that the DOJ has said the call was “good” and ended with the absurd and confusing statement that “We don’t have freedom of the press!”

We, of course, do have freedom of the press as it’s codified in the Constitution.  It’s unclear exactly what he was trying to get across with this sentence in particular, but he has repeatedly demonstrated that he has no respect for the free press and the responsibility it has in keeping government power accountable and in check. Suffice to say, it was a deeply inappropriate comment for a president to make.

Bill Barr did not decline my request to talk about Ukraine. The story was a Fake Washington Post con job with an “anonymous” source that doesn’t exist. Just read the Transcript. The Justice Department already ruled that the call was good. We don’t have freedom of the press!

By the next tweet, Trump appeared to have worked himself into an even greater state of agitation and slammed The Washington Post as “degenerate” and said that they “MADE UP” the Barr story and that they have no sources. It should hardly have to be pointed out by now that anyone who is taking the word of serial liar Donald Trump over the Post—the publication which helped publish the Pentagon Papers and broke the Watergate Story—is a willingly ignorant fool.

The degenerate Washington Post MADE UP the story about me asking Bill Barr to hold a news conference. Never happened, and there were no sources!

He repeated his urging for people to read the transcript. You can do so here, although the president almost certainly doesn’t really want you to.

The president then gave yet another unconvincing attempt to smear the whistleblower who originally exposed the Ukraine scandal. He stated that “information released last night about the Whistleblowers [sic] attorney” means the “Impeachment Hoax” should end immediately. Presumably, he was referring to the latest obsession of the right-wing media machine which centers around some tweets the whistleblower’s attorney made in 2017 predicting a “coup” against Trump.

The attorney has clarified that he simply meant Trump would inevitably end up “stepping over the line” and would be subsequently removed from office in a lawful manner. In any case, the tweets are completely irrelevant to this impeachment inquiry as they have no absolutely no bearing whatsoever on what Trump did. He tried to strongarm a foreign leader into hurting a political opponent by using frozen military aid as leverage. No random old tweets change that face. He must be impeached.

Based on the information released last night about the Fake Whistleblowers attorney, the Impeachment Hoax should be ended IMMEDIATELY! There is no case, except against the other side!

After that, we got a bit more of his lazy efforts to redirect attention to Joe Biden’s son Hunter to take heat off himself.

“What did Hunter Biden do for the money?” @SenJohnKennedy A very good question. He and Sleepy Joe must testify!

Trump then complained that he will get “NO LAWYER & NO DUE PROCESS” for the House’s upcoming impeachment which is incredibly ignorant on his part since impeachment is not a legal process but a political one.

It was just explained to me that for next weeks Fake Hearing (trial) in the House, as they interview Never Trumpers and others, I get NO LAWYER & NO DUE PROCESS. It is a Pelosi, Schiff, Scam against the Republican Party and me. This Witch Hunt should not be allowed to proceed!

Betraying more than a little insecurity, Trump next shared a meme touting a 50% approval rating found in a single poll. In reality, his approval is closer to 41.4% and his disapproval is at 54.3%. He is a deeply unpopular president. 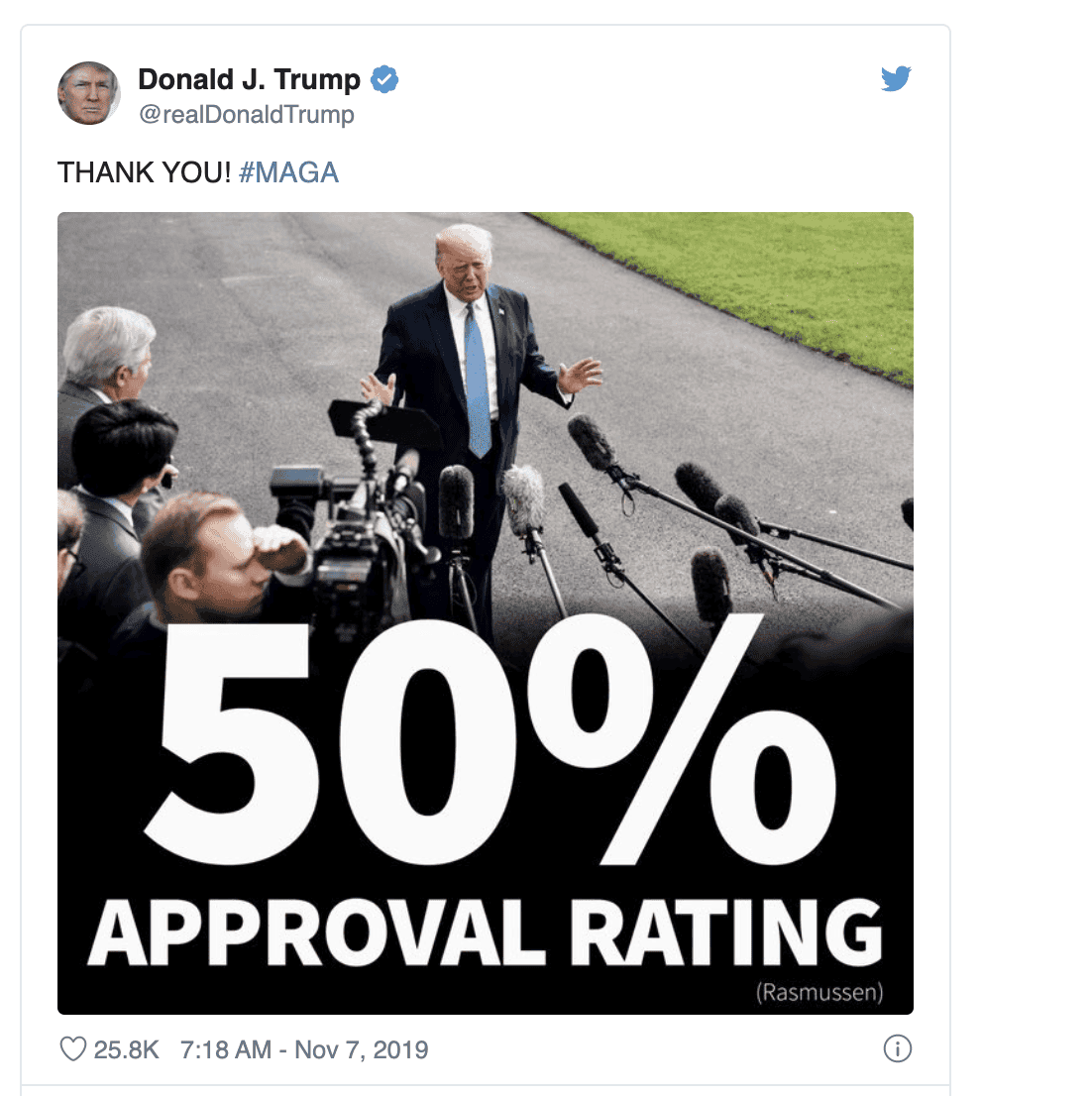 Clearly unable to get it off his mind, he then launched another attack on The Washington Post’s Bill Barr story, and this one was no less pathetic.

The Amazon Washington Post and three lowlife reporters, Matt Zapotosky, Josh Dawsey, and Carol Leonnig, wrote another Fake News story, without any sources (pure fiction), about Bill Barr & myself. We both deny this story, which they knew before they wrote it. A garbage newspaper!

Trump then claimed that the “Impeachment Hoax” is “already turning” against Democrats, a completely unfactual statement given that Democrats had a great string of election victories just this past Tuesday.

The Radical Left Dems and LameStream Media are just trying to make it hard for Republicans and me to win in 2020. The new Impeachment Hoax is already turning against them!

By the end of the tweets, he had run out of things to and so simply bragged about the stock market.

After trudging through all of these lie-ridden tweets from the so-called “Leader of the Free World” one can’t help but look forward to 2020 even more eagerly. Finally, we’ll be able to evict this clown from the White House and vote in a President of the United States with not only some dignity, but sanity as well.