Following a day of dramatic impeachment hearing testimony by former Ukraine Ambassador Marie Yovanovitch, a new bombshell witness deposition just revealed that one of her former embassy staffers is a firsthand witness to President Trump’s corrupt demands for an investigation into Vice President Joe Biden. (video below)

Amazingly, the first-hand testimony was only possible because Trump was yelling so loudly into the ear of EU ambassador Gordon Sondland that Sondland had to hold the phone away from his ear and let the president’s voice carry into the entire room.

At the tail end of today’s hearing where Republicans complained rabidly about hearsay testimony, ranking member Devin Nunes (R-CA) glumly complained about having to trek into a basement two blocks from the Capitol to hear first-hand testimony about President Trump’s bribery scheme tonight in a sensitive, compartmented information facility (SCIF).

A copy of Holmes’ 10-page opening statement, which CNN obtained (embedded below), shows that Trump and Sondland were anything but secure about the sensitive information they discussed on an unsecured cellphone while the Ambassador was in a Kyiv restaurant with multiple embassy staffers.

Daniel Holmes accompanied the EU Ambassador to a meeting with Ukrainian President Zelensky on July 26th, the day after the now-infamous phone call where Trump asked him for a favor.  In Kyiv, the next day, Zelensky said that Trump raised “some sensitive issues” three times which he now believes would indicate asking for investigations into the Bidens based on the conversation memo which the White House released.

After that meeting, the American delegation departed to lunch, and an utterly surreal scene played out on the outdoor terrace of a restaurant.

Ambassador Sondland took the call at the table, went through multiple layers of handlers like one does to speak to the president and proceeded to have an extremely candid discussion about their efforts to bribe the Ukrainian president, who Sondland had just left at a face-to-face meeting.

Holmes testified that Sondland held the phone out from his ear because Trump was so loud, and the unmistakable voice of the President poured out of the phone demanding, “So, he’s gonna do the investigation?” to which Sondland replied, “He’s gonna do it…[he would do] anything you ask him to.” 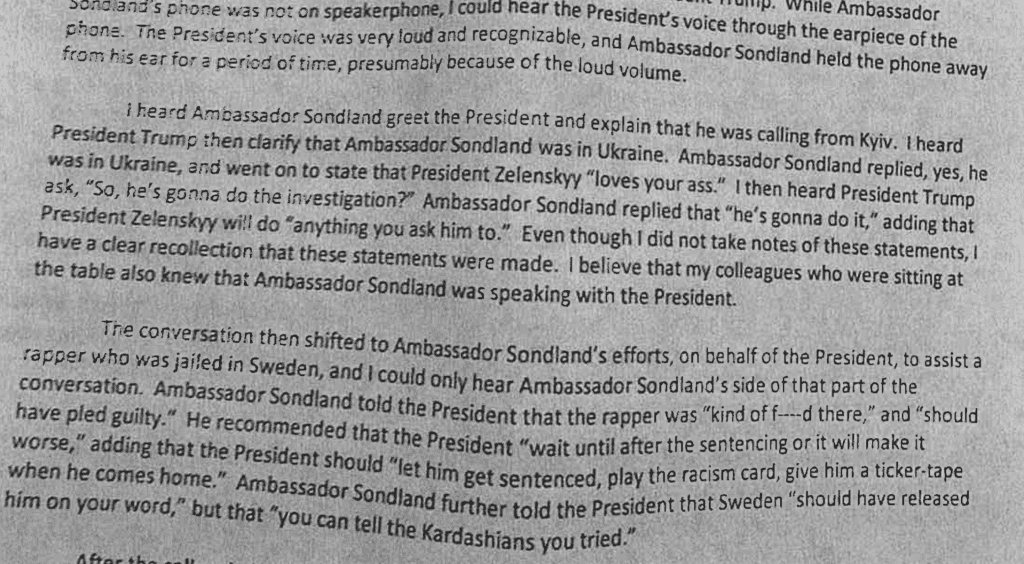 Sondland told Holmes that Trump didn’t give a sh*t about Ukraine, all he cared about was “big stuff” — which meant the things that benefited the President, like his demands for fake investigations into the Bidens.

It is immediately apparent that Daniel Holmes will become a key witness in the House impeachment inquiry, and his testimony shows that he also attended the fateful July 18th secure video conference where aid was abruptly withheld.

Holmes also happened to be the note-taker at meetings with Senators Chris Murphy (D-CT) and Ron Johnson (R-WI) when they visited Kyiv.

House Republicans put on a thin display of defending the President at today’s public impeachment hearing, but their defense is about to blow up in their face when Daniel Holmes’ devastating first-hand testimony is brought completely into the light.

I obtained a copy of David Holmes' opening statement, saying that he heard Trump telling Gordon Sondland: "So, he's gonna do the investigation?" Sondland tells Trump: "He's gonna do it" and that Zelensky will do "anything you ask for." pic.twitter.com/24RgVCvzoy