The House Intelligence Committee has released an explosive cache of documents (embedded below) from indicted Ukrainian-American Lev Parnas which look like they’ll feature prominently in President Trump’s impeachment trial. The records reveal far more about the true nature of the President’s personal lawyer’s machinations in Ukraine, along with several other surprises.

Amongst several bombshell revelations is that New York Mayor Rudy Giuliani personally sent a letter to Ukraine’s then-President-elect Zelensky asking for a thirty-minute meeting this past May 10th, 2019. “Just to be precise,” said Trump’s lawyer, “I represent him as a private citizen, not as President of the United States.”

The collection of text messages also reveals that Giuliani’s team appears to have been involved in direct physical surveillance of former Ukraine Ambassador Marie Yovanovitch, whom Trump unceremoniously recalled amidst a sea of relentless libel attacks generated by his lawyer and the right-wing media universe.

In addition, the cache of records reveals that President Trump’s top defense lawyer Jay Sekulow was involved in Giuliani’s machinations and is, therefore, a fact witness in the case against his client.

Lastly, the final document in the cache is an email with written permission from Sekulow to former Trump criminal defense lawyer John Dowd which gave him permission from the President himself to act as Lev Parnas’ criminal defense lawyer. The arrangement of Dowd as defense counsel fell apart after the President inevitably claimed to not know Parnas, an action that caused him to flip on Trump after at first attempting to stonewall Congressional investigators.

The most explosive single record of the 38-page document released by the House Permanent Select Committee on Intelligence is a letter from Rudy Giuliani to President Zelensky in between his landslide election as a corruption fighter and his inauguration, which Parnas has said was part of a demand he carried to seek baseless investigations into the Bidens as a quid pro quo offered in exchange for Vice President Mike Pence’s presence at the swearing-in ceremony.

Pence didn’t attend, but former Energy Secretary Rick Perry went in his stead as part of a small delegation.

“In my capacity as personal counsel to President Trump and with his knowledge and consent,” Giuliani wrote in his penultimate paragraph of the one-page letter, “I request a meeting with you on this upcoming May 13th or 14th.” The president’s lawyer said that another of Trump’s personal lawyers, frequent Fox News guest Victoria Toensing, would accompany him.

A 1799 law called the Logan Act forbids “any citizen of the United States” from carrying on any correspondence with a foreign government with the intent to influence them in any “disputes or controversies” with America. While the law has been enforced numerous times throughout the years by the State Department, nobody has been imprisoned for violating it, though it is a felony offense that carries a maximum three years penalty.

Here is a copy of Rudy Giuliani’s letter to Ukrainian President Volodymyr Zelensky before his swearing-in. Story continues below: 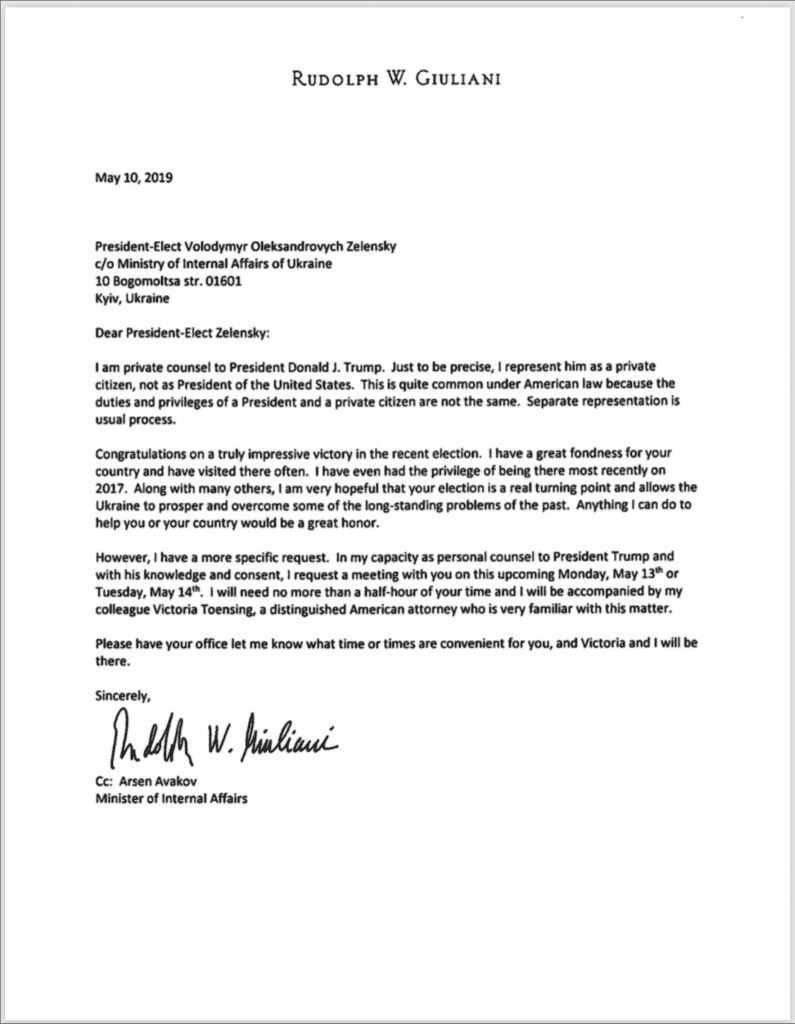 Memorably, former Ukraine Ambassador Yovanovitch testified in the impeachment hearings that she was told there was an imminent threat to her person when the government chose to recall her on literally the eve of President Zelensky’s inauguration, which she learned while she attended an event for a slain anti-corruption activist in Kyiv. Parnas’ records indicate the kind of realtime surveillance that gives credence to an institutional concern for her safety.

But the records implicating presidential defense lawyer Jay Sekulow in the acts precipitating impeachment are a grave blow to Donald Trump’s efforts to mount a defense in the Senate trial because the impeachment managers will in all likelihood seek his sworn testimony due to the Parnas documents revealed tonight.

Here are the messages between Parnas and Giuliani that involve Trump’s defense lawyer Jay Sekulow. Story continues below: 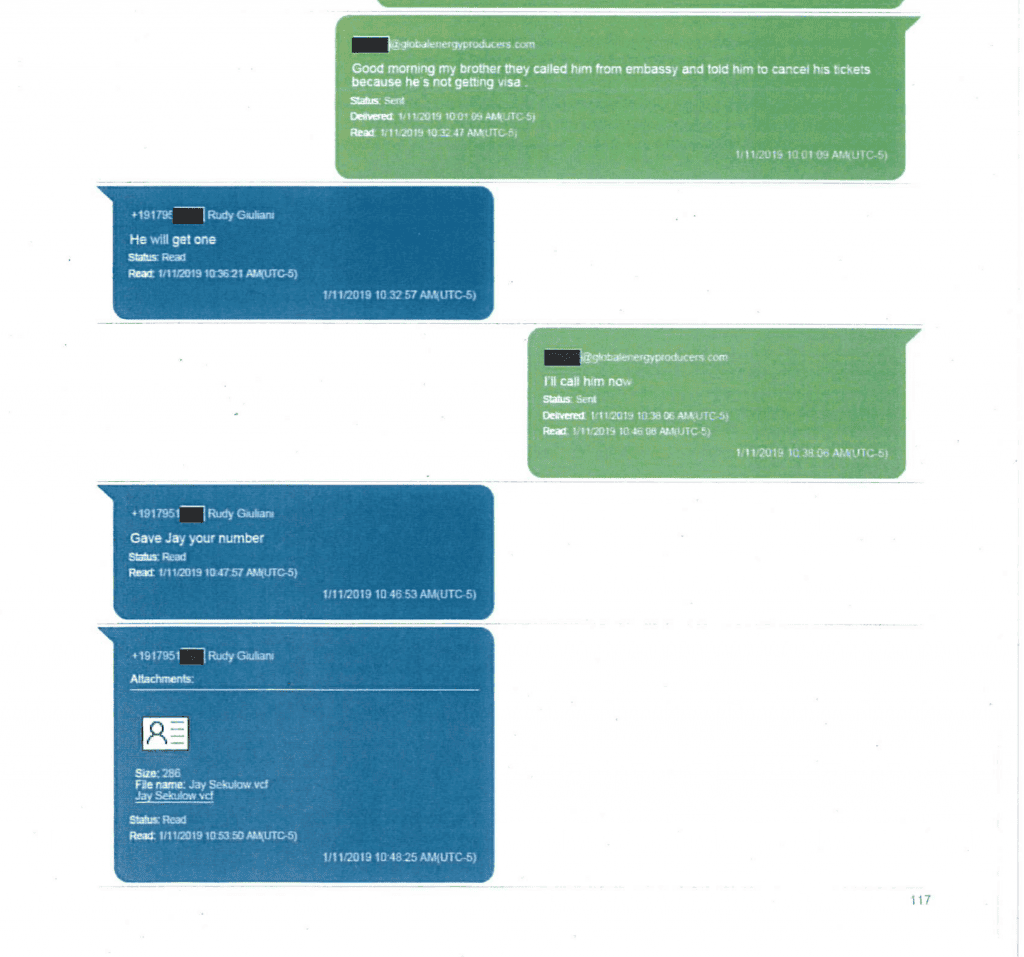 A “fact witness” is a person with particular knowledge about the facts of a case whose testimony consists of a recitation of events, not opinions such as an expert witness might provide.

When a lawyer is a fact witness, generally they must abandon their work as an advocate under the “lawyer-witness rule,” except when that might present a substantial hardship for the client. However, that rule only applies to federal court. It will be up to the Senate’s decision during the trial if Sekulow is allowed to stay on as Trump’s defense counsel, now that his potentially personal and direct involvement in the President’s private pressure campaign against Ukraine has been exposed.

Finally, an email from Sekulow to former presidential criminal lawyer John Dowd demonstrates how flagrantly Trump has lied to the world about his involvement with Lev Parnas and Igor Fruman.

Trump’s personal approval was a necessity for Dowd to represent Parnas because the two men could potentially have a conflict of interest, which has rapidly turned into a very high profile actual conflict between them as Florida-based proprietor of the company Fraud Guarantee chose to cooperate with Congress.

Here is the message from Sekulow to Dowd. Story continues below:

Only weeks after the above email between Trump’s personal lawyer and the comic sans-loving attorney Dowd, Parnas fired the longtime DC attorney.

Donald Trump has a storied history of his closest associates hiring new counsel and flipping on him after he publicly distances himself from them, such as his convicted former lawyer Michael Cohen who is serving a three-year term in federal prison.

“Mr. Parnas was very upset by President Trump’s plainly false statement that he did not know him,” Parnas’ current lawyer Joseph A. Bondy told the New York Times. Now, the longtime marijuana advocate Bondy is generating a significant amount of viral interest in his client’s story by releasing a series of music videos, which prove pretty definitively that Lev wasn’t just a casual Trump associate, but a friend to the whole family.

One video features photographs of Lev Parnas with members of the Trump family (set to “We are family” by Sister Sledge). Another shows Parnas holding the gavel of former GOP House Rules Committee Chairman Pete Sessions while sitting on the dais with the Texas politician’s nameplate (set to “Hammer time” by MC Hammer).

President Trump has variously complained about impeachment as a “dirty, filthy, disgusting word” and later went on Fox News to bizarrely ask to be put on trial for crimes of office.  In Speaker Pelosi’s recent but sure to be immortal words, he is “impeached forever”.

With the help of his former friend Lev Parnas, it is looking like the House impeachment managers that the Speaker names to prosecute the case are going to have a lot more material to throw at President Trump in his Senate trial, which the White House now expects will include witnesses.

Here is the complete set of Parnas Docs: