One of the lasting images of the last days of the presidency of Richard Nixon is of the exhausted, physically and mentally unwell president drinking alone in the White House on the eve of the resignation he acceded to in order to avoid the shame of impeachment.

Donald Trump lacks the taste for alcohol and the sense of shame to emulate the disgraced criminal president’s behavior in what will hopefully be among his own last days occupying the Oval Office.

Rather than sit alone and drown his impeachment sorrows in the bottle, Trump broadcasts them to the world in a series of defensive and self-pitying tweets that alternate between trying to convince the world of his innocence through the endless repetition of obvious lies and accusing his prosecutors of perfidy in their presentation of the copious evidence against him.

The man who once said that he would not have time to play golf as president — and then proceeded to spend at least 244 days and $124 million of taxpayer dollars to do exactly that —  now spends a good portion of his days tweeting endlessly about the “unfairness” of his impeachment, about what a great job he is doing, and providing examples of how willing his Republican supporters are to kiss his royal behind to curry favor with him.

If only anything that he tweeted had an inkling of truth to its contents. Even when a Trump tweet does have a limited basis in reality, the spin and omissions contained in it render it as false as his complete fabrications.

Take this midday tweet from the president on this Sunday break from the Senate impeachment trial.

Retweeting random “quotes” and video clips from the virtual state media outlet of Fox News is a standard feature of the president’s twitter feed, so many people would read the above statement and dismiss it as simply just more of Trump’s tactic of reinforcing the reverberations of his right-wing echo chamber to maximize the effect of his defenders’ support.

Yet, this particular tweet is far more insidious than it initially appears.

You see, the poll that Fox News conducted to conclude that a majority of citizens think that the Senate already has sufficient information in Trump’s impeachment trial that no more witnesses or evidence need be introduced, also demonstrates that a clear majority also want him convicted and removed from office based on the already available evidence. 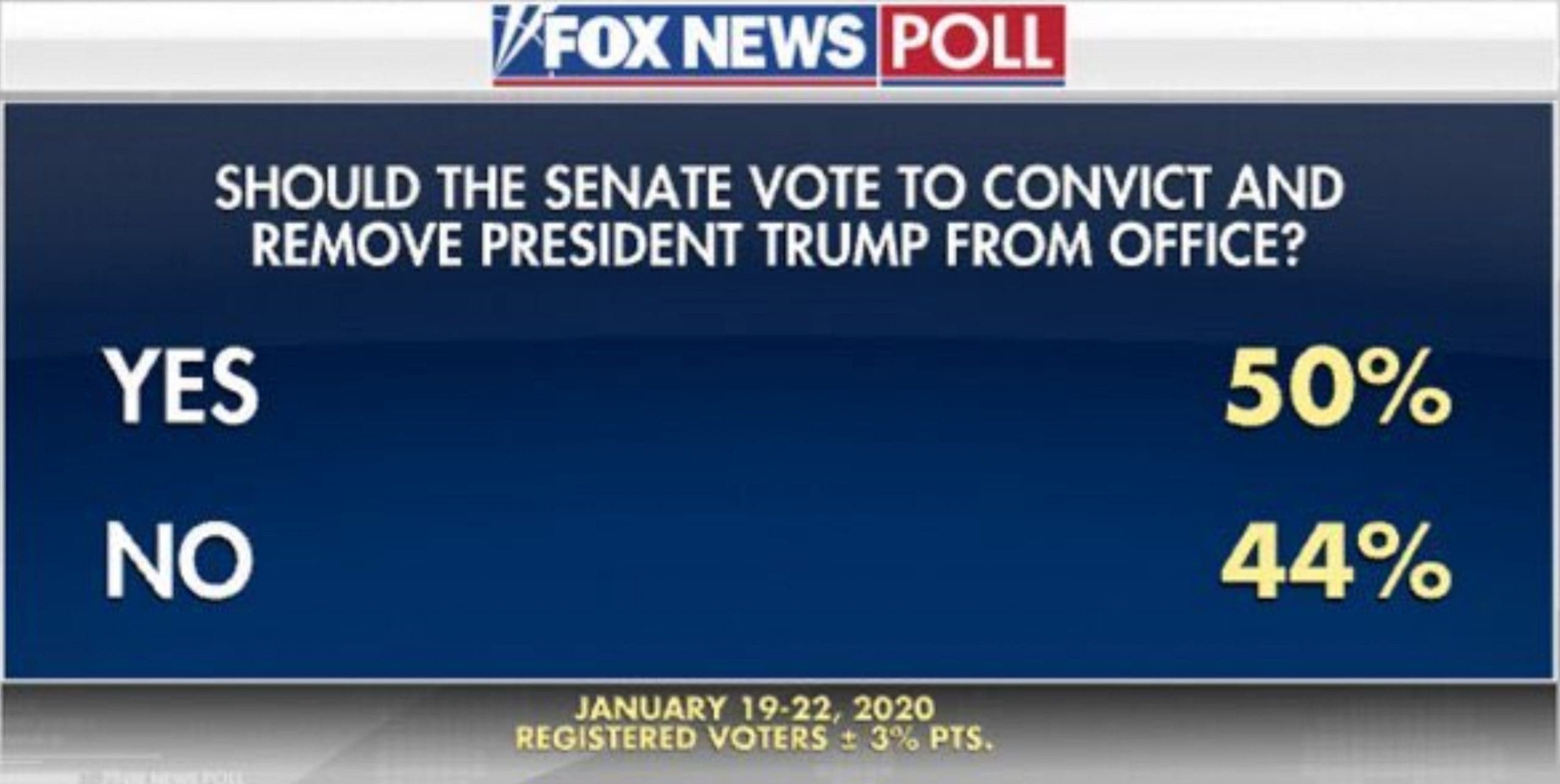 The president’s spin here is so audacious as to be either completely delusional or the rhetorical equivalent of a hail mary pass.

Trump’s tweets as the trial continues on have devolved at times to a form of social media Tourette’s syndrome, with the president tweeting and retweeting the same lame catchphrases in his defense despite their negligible relationship to the truth.

For example, take another of his tweets from this afternoon that repeats for the umpteenth time Trump’s capitalized admonition to “read the transcripts” of his self-described “perfect” phone call with Ukraine President Volodymyr Zelensky.

Nothing done wrong, READ THE TRANSCRIPTS!

Trump is counting on an ill-informed public to think that the redacted call summary that he has provided of the conversation — the cover page of which clearly states that it is NOT a full transcript of the call — is all the exoneration he needs to deny the existence of the quid pro quo that forms part of the basis for his impeachment.

He’s counting on the vast majority of people to not visit the White House web page containing a scan of the unclassified version of the document where they would clearly see this note on the front page:

“CAUTION: A Memorandum of a Telephone Conversation (TELCON) is not a verbatim transcript of a discussion. The text in this document records the notes and recollections of Situation Room Duty Officers and NSC policy staff assigned to listen and memorialize the conversation in written form as the conversation takes place. A numper of factors can affect ‘the accuracy of the record, including poor telecommunications connections and variations in accent and/or interpretation. The word “inaudible” is used to indicate portions of a conversation that the notetaker was unable to hear.

Yes, read the transcripts because — even in their redacted form — the evidence of extortionary intent is obvious, but be aware that the supposed record of the conversation has been carefully edited to omit anything beyond what the White House is willing to divulge.

The sad fact is that even with a full half of the nation agreeing that Trump must be removed from office, his fate will remain in the hands of a group of Republican Senators too fearful of retribution and too lacking in courage to rise up to the occasion that their constitutional oath requires.

While the rest of us wait to suffer the nearly inevitable outcome of a sham and rigged impeachment trial, a pathetic figure will be hunched over his phone blasting out a never-ending series of tweets from an imagined reality of his own making, willing the legitimacy of his likely acquittal into an unjustified existence one character at a time.