“Get your facts straight!” Chris Wallace unloads on co-host after she tries to sell pro-Trump spin

Secretary of State Mike Pompeo’s vicious public attack on NPR reporter Mary Louise Kelly after she had the temerity to question him regarding his actions in the Ukraine scandal has turned even one of his usually reliable allies at Fox News against him.

After Pompeo issued an official State Department press release calling the veteran Harvard and Cambridge educated radio correspondent a liar on Saturday after she detailed the account of Pompeo lambasting her after the interview with a profanity-laden temper tantrum despite the fact that Kelly had informed the secretary’s staff in advance of the topics she would be covering.

NPR's Mary Louise Kelly says the following happened after the interview in which she asked some tough questions to Secretary of State Mike Pompeo. pic.twitter.com/cRTb71fZvX 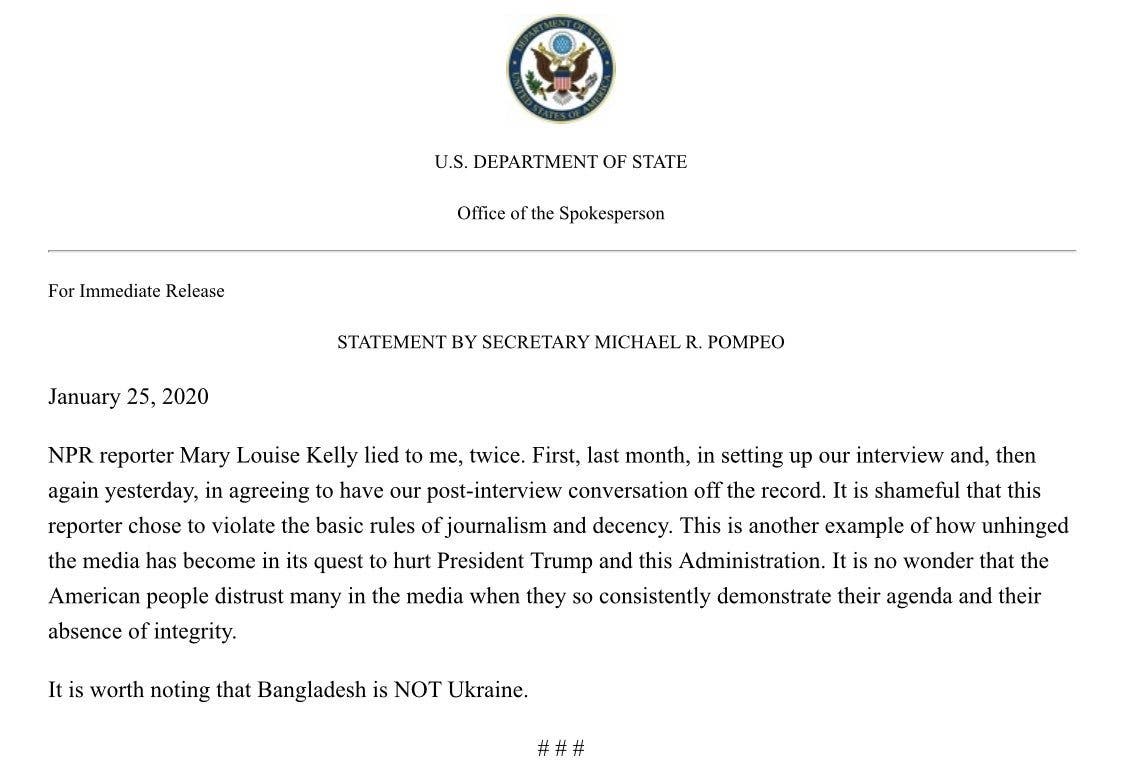 Steve Hilton, the host of the Sunday night Fox News program The Next Revolution, found the Secretary of State’s behavior too much to tolerate, siding with his fellow journalist rather than the Trump administration in this rare instance.

“Secretary of State Mike Pompeo got into an ugly dust up with an NPR reporter this week and I’ve got something I want to get off my chest. First, I want to make clear I’m a big fan of the secretary. I appreciate his tough stand on many issues, not least China.” Hilton told his viewers last night.

The Fox News reporter is apparently a regular NPR listener and considers Kelly an unbiased source as he related to his audience.

“I listen to NPR a lot and I can tell you that Mary Louise Kelly is one of the very few hosts on there who actually seems fair and is not totally biased against President Trump,” Hilton said.

Hilton then proceded to ridicule Pompeo for his infantile reaction to what any politician worth their salt would consider just a part of the rough and tumble world of media relations when you’re sitting in a position of such governmental power with a responsibility to justify your actions to the public for whom you supposedly act on behalf.

“For goodness sake, Mr. Secretary, don’t be such a baby. You should be able to handle tough questions by now, and don’t be such a bully. Foul-mouth ranting at a reporter doing her job is an embarrassment to you and the administration,” Hilton reminded the Secretary of State. “You should apologize and people will think much more of you if you do.”

Pompeo would do well to heed the advice of Hilton who was once a strategy director for former British Prime Minister David Cameron and presumably knows a thing or two about public relations.

Expecting rational and reasonable behavior from politicians who find themselves in situations where they instinctually react like a cornered rat may be more of a hopeful presumption than a realistic supposition, particularly when the removal of the president from office is concerned and your own job and reputation are hanging by a thread.

You can watch the rare sight of a Fox News host criticizing a senior Trump Administration cabinet member in the video excerpt of Steve Hilton on The Next Revolution below.

Original reporting by Joe Concha at The Hill.