The Attorney General’s decision to possibly reduce the sentencing recommendation for former Trump campaign manager Roger Stone from 7-9 years in prison has led three federal prosecutors to quit the case, with one resigning his position as a prosecutor permanently.

Just yesterday, prosecutors in the US Attorney’s office for the District of Columbia submitted a sentencing memo seeking a lengthy term of imprisonment for Stone, who was convicted of lying to Congress and witness intimidation in the House Intelligence Committee’s Trump-Russia probe.

But without warning, career prosecutors were overruled by the Justice Department, which dispatched a senior official to say they were “was shocked to see the sentencing recommendation in the Roger Stone case last night, despite recent history showing that a seven-year sentence is typical for high-ranking former Trump campaign officials unless they cooperate with prosecutors.

In response, a former Mueller prosecutor dropped the case and one of the DC office’s career prosecutors— who had only found out about the sentencing changes when the Washington Post called for comment—flat out resigned from the Department of Justice entirely in protest. 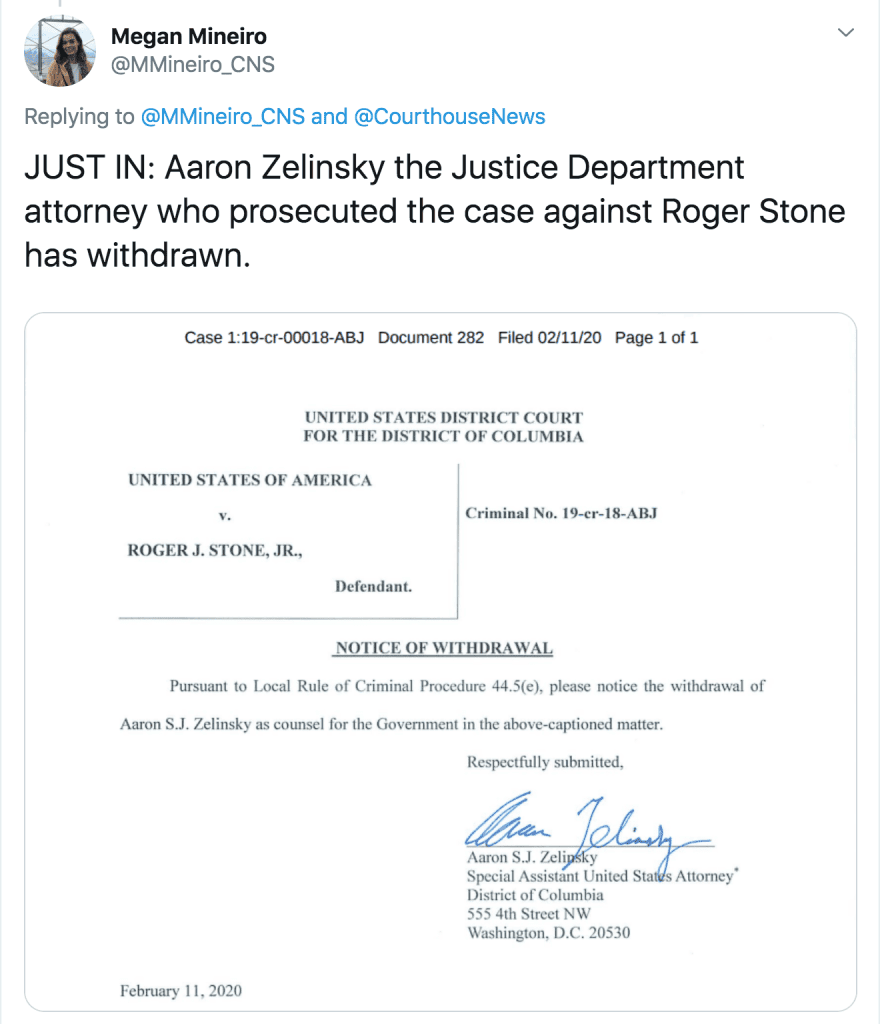 MORE BREAKING: Now a veteran federal prosecutor in DC assigned to Stone case an not from Mueller team, Jonathan Kravis, has resigned his post. Developing…..https://t.co/FFngOWpBNe pic.twitter.com/jDrF9xuCsm

Adam Jed became the third prosecutor to quit Stone’s case just an hour after the announcement that the DOJ would overrule career officials to favor Trump’s friend. He was quickly followed by a fourth prosecutor, Michael Marando.

Former DOJ officials are calling their resignations a “break the glass moment” and part of an ongoing “fire” in America’s top law enforcement agency.

“A shocking, cram-down political intervention in the criminal justice process,” tweeted David Laufman, former head of the DOJ’s Counterintelligence section. “We are now truly at a break-glass-in-case-of-fire moment for the Justice Dept.”

Add your name to tell the ABA: Disbar William Barr for abusing the Justice Department to abet Trump’s corruption!

“This, the 2nd withdrawal notice from a career prosecutor, speaks loudly to those of us who used to work at DOJ,” tweeted former US Attorney Joyce Vance. “There is a 4-alarm fire at Justice.”

The entire reversal began this morning when President Trump took to Twitter in the middle of the night to complain vigorously that his former campaign advisor and longtime confidant was going to be punished for committing crimes on his behalf.

This is a horrible and very unfair situation. The real crimes were on the other side, as nothing happens to them. Cannot allow this miscarriage of justice! https://t.co/rHPfYX6Vbv

But the genesis of today’s about-face predates Trump’s tweet by a month, when Attorney General William Barr made an unusual personnel move by shuffling Jessica Liu, the former US Attorney for DC, out of her office overseeing Stone’s case.

On Jan. 6th, Liu was appointed as an Undersecretary in the Treasury Department, clearing the way for one of Barr’s closest advisors, Timothy Shea, to take over as Acting US Attorney. The Post reports:

While Liu’s nomination was announced Jan. 6, it was somewhat unusual that she departed before a Senate confirmation hearing was scheduled. Moreover, the selection of Shea to replace her was outside the norm, as it bypassed the office’s veteran principal assistant U.S. attorney, Alessio Evangelista. In the past, the principal assistant has often been elevated to serve as interim U.S. attorney.

News that Stone’s trial would uncover Trump’s criminal acts has been trickling out since last fall.

In October, House Democrats indicated that Donald Trump lied to Special Counsel Mueller about the very issues that Roger Stone was convicted of covering up.

Now, President Trump is busy capitalizing on personnel shuffling at the DOJ by setting up a public relations sham to excuse himself for pardoning his closest confidant when the judge issues an expected stiff sentence for Stone’s role in covering up the President’s ties to Wikileaks and Russia.

HOT TAKE: This is a set up to give ⁦@realDonaldTrump⁩ justification to pardon him because any sentence will be from what he calls an “Obama Judge.” pic.twitter.com/HKkqkcythe

It’s a sordid state of affairs for American justice when a President can help his convicted felon associates get away with their misdeeds.