Some Republicans are like a broken clock. They manage to give the right answer in extremely limited circumstances, not often mind you, but at least enough that they should be acknowledged when they do so.

Congresswoman Liz Cheney (R-WY) — the daughter of former Vice President Dick Cheney and the third highest-ranking GOP member in the House of Representatives — found her hands in rare alignment with the truth today as she rejected Donald Trump’s premature calls to end strict quarantines against the threat of the coronavirus and get people back to work to save the rapidly contracting American economy.

Representative Cheney explained her position in comments on a Twitter thread she forwarded from Dr. Scott Gottlieb — the former commissioner of the Food and Drug Administration under Trump — who advocated a more sensible, long-term response to the COVID-19 pandemic that was in direct contradiction to the president’s eagerness to get people out of their homes and back on the streets.

There will be no normally functioning economy if our hospitals are overwhelmed and thousands of Americans of all ages, including our doctors and nurses, lay dying because we have failed to do what’s necessary to stop the virus. https://t.co/AchwfXtuLi

The ability of a leading Republican to understand the idiocy of Trump’s single-minded focus on restarting an economy damaged by the business shutdowns — all in an effort to prevent his reelection campaign from swirling down the toilet like the defecatory product that his continued candidacy after his disastrous missteps in the early phases of the pandemic has made it — allows us some hope that the president won’t find his normally complacent Republican enablers supporting his insane and deadly agenda.

Cheney’s ability to think beyond the latest poll numbers and focus on the primacy of human lives rather than the bonuses of Wall Street executives led to her receiving praise on Twitter from people who wouldn’t normally have a good thing to say about the congresswoman and her policies. 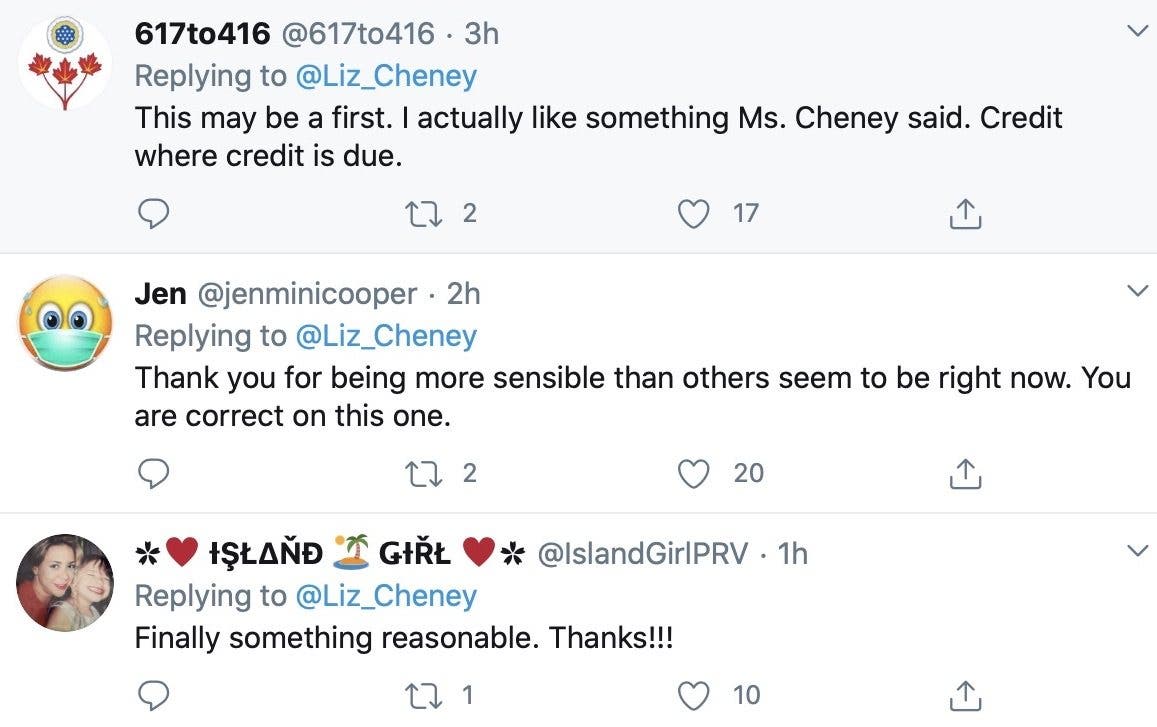 Add your name to tell the Senate: Say NO to Trump’s $500 billion slush fund for corporations in the emergency relief bill!

It’s like twice a year. She stood up for Vindman when he was under attack and I was so conflicted. pic.twitter.com/0srWbysyG5

Yes, but remember it's just a microsecond. She will return to her true form as a garbage human being any time now. #WaitForIt

My God. I retweeted Liz Cheney. Or the pod that replaced her.

I think she is telling that to Trump.

They all talk tough about reopening the economy until they show up with a sick family member and can’t get into the hospital for the piles of bodies.

That was my reaction too.

Kudos to Representative Cheney for her ability to buck the president when it really counts. Perhaps the praise she is receiving will lead her to remain steadfast in her opposition to Trump’s suicidal plans for the health of Americans to help save his own riches and those of his wealthy supporters.