McConnell goes full Trump in response to a reporter’s question: “Do you work here?”

It took just one week of mass quarantine and a shuttered economy for our nation’s ruling class to pull off their masks and admit that they would rather see us die than lose their money.

Alarmed by the damage to a plunging stock market and shrinking economic growth, the wealthy elites and their mouthpieces have already begun pushing for people to begin returning to work and begin producing profit for them despite it being clear to everyone that we are nowhere near peak infection rates and that to do so would exacerbate the crisis and cause the needless deaths of thousands of people.

The suffering and deaths of working Americans have always been an acceptable price to pay for the preservation of the wealthy’s fortunes, but never before have they articulated it so explicitly. “We’ll gradually bring those people back and see what happens. Some of them will get sick, some may even die, I don’t know,” shrugged millionaire Dick Kovacevich, the former CEO of Wells Fargo.“Do you want to suffer more economically or take some risk that you’ll get flu-like symptoms and a flu-like experience? Do you want to take an economic risk or a health risk? You get to choose.”

He’s not the only one. Lloyd Blankfein, the billionaire senior chairman of Goldman Sachs, argues that as soon as “a very few weeks, let those with a lower risk to the disease return to work,” while Texas’ Lt. Governor Dan Patrick made headlines the other night when he called on our nation’s grandparents to “sacrifice” themselves if necessary so that young people can go back to work.

Add your name to tell Congress: Say NO to Trump’s $500 billion slush fund for corporations in the emergency relief bill!

President Trump himself has already begun arguing that the “cure cannot be worse than the disease” and pushing to re-open the economy as soon as two weeks from now — on Easter, so that people can be packed into churches by the hundreds.

Right-wing commentators who work from home promoting racist conspiracy theories for billionaire-funded propaganda rags and YouTube channels like Glenn Beck and the Federalist’s Jesse Kelly have been bravely volunteering to die for the good of the economy, comfortably aware they will never be in danger of doing so.

The Federalist even went one further, taking a break from stoking transphobia to publish an article by an Oregon dermatologist this morning that called for deliberately infecting people with the coronavirus in order for them to become “immune” to the disease. 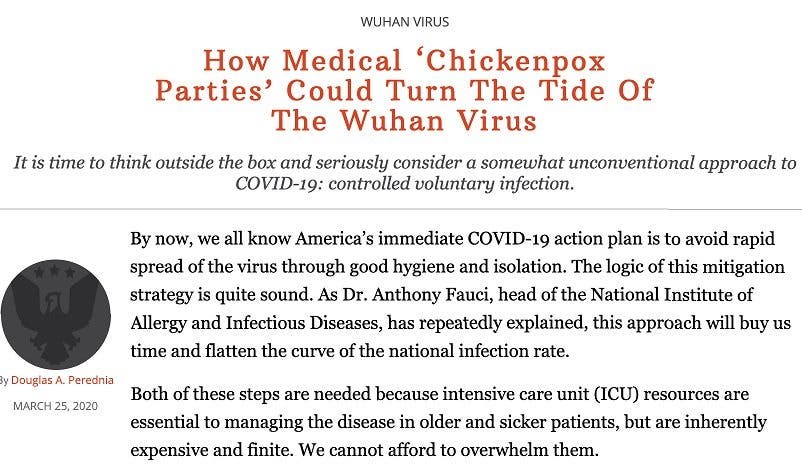 Twitter quickly flagged the piece as misinformation and forced them to take it down.

But it is terrifying to see the rapidity with which the right-wing media machine and the oligarchs that fund it have taken to promoting the idea that ordinary people need to sacrifice their lives and those of their families in support of some nebulous, self-serving conception of the greater good.

“It is absolutely necessary to shut down the economy so that millions of people don’t die. For the privileged among us to fail to see that and to give the economy precedence over this public health emergency is morally reprehensible” raged former Labor Secretary Robert Reich.

Healthcare experts have made it very clear that abandoning quarantine procedures and having the nation resume some level of normalcy in just two weeks will produce so many cases that our already stretched and insufficient healthcare system will be utterly overwhelmed.

The president’s own disease expert, Dr. Fauci, warned this afternoon that the virus could return for another “cycle” and we need to be prepared for it, but Trump and the CEOs whispering in his ear are clearly more concerned about their wallets than about the lives of the American people.

Remember this lesson, bc it informs a LOT of US policy. https://t.co/Dk0jNshuoE