For more than three years, President Trump’s congressional enablers have been defending the indefensible, often with Senate Republican Leader Mitch McConnell (R-KY) leading the charge.  Now it seems, in the midst of Republicans’ disastrous response to coronavirus, likely to cost tens of thousand of Americans their lives, McConnell has run out of defenses and has moved on to excuses — albeit pathetic ones.

In an interview Tuesday with right-wing radio talk show host Hugh Hewitt, McConnell declined to deny Trump’s ignorance and inaction in response to the global outbreak, instead trying to pin the president’s failure on — you guessed it — Democrats.

“It came up while we were, you know, tied down in the impeachment trial,” McConnell told Hewitt. “And I think it diverted the attention of the government, because everything, every day was all about impeachment.”

In other words, the president could not focus on a deadly threat to millions of Americans because his attention was “diverted” to managing the PR strategy surrounding McConnell’s sham impeachment trial.

Nevertheless, it remains an astonishing turning point for McConnell to refuse to stand by the president’s actions no matter how ridiculous his excuse. One can presume that had Bill Clinton gotten 100,000 Americans killed during his impeachment, McConnell would not have taken the blame.

McConnell is counting on the listeners of Hewitt’s program not being savvy enough to check their calendars to verify the timeline of events of both the warnings about the coronavirus, then just beginning to become a major problem in China, and the horribly truncated, witnessless Senate impeachment “trial.”

Luckily, countless social media political observers have access to both calendars and newsfeeds and can create memes like this one to show where the end of the impeachment trial on February 5th fits into the coronavirus timeline. 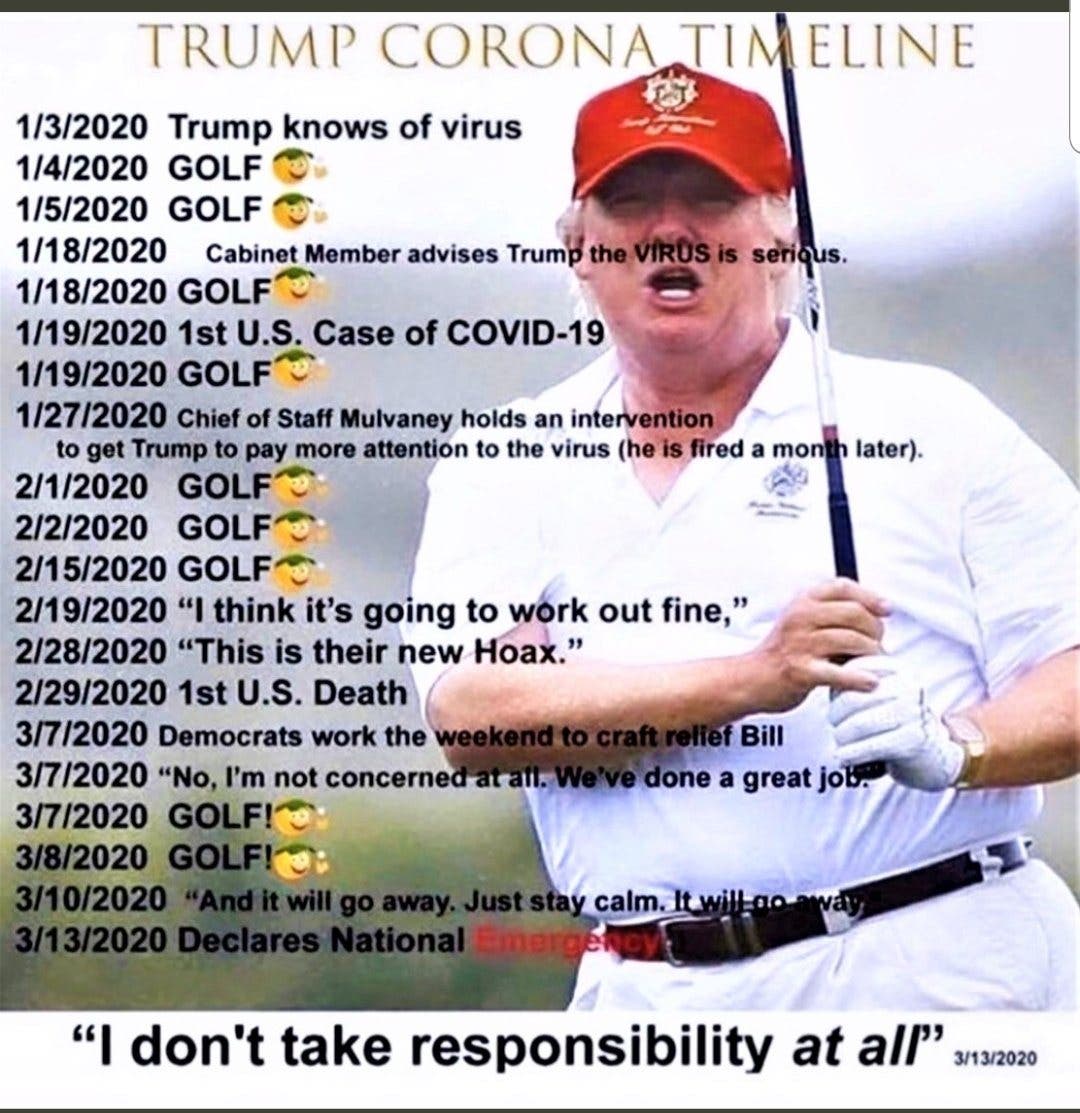 Hmmm, seems like more than a month transpired between the end of the impeachment trial and the point where the president actually began to take the COVID-19 epidemic seriously — a month in which Trump continued to deny facts, spread misinformation and false assurances, and failed to do anything whatsoever to prepare the federal government for a crisis he was specifically warned of at the beginning of the year and simply ignored.

The viral meme above doesn’t even list the multiple political rallies that Trump managed to fit into his busy golf schedule during the first months of the year.

Perhaps House Budget Chair John Yarmuth (D-KY), both McConnell’s representative and constituent, said it best when he pointed out that the Senator is at least acknowledging Trump’s failure:

But I guess finally admitting that the Trump administration blew the response is something.

McConnell’s perpetration of putrid political talking points to try to shift blame away from Trump and onto the Democrats ignores one glaring fact: if he himself hadn’t fixed the trial to prevent the testimony of first-person fact witnesses to the president’s impeachable behavior and suppressed the document requests made by Democrats, America might have had a leader in charge now who wasn’t dangerously unstable, dishonest, and self-interestedly crooked to help see his through this crisis.

Rather than blame the Democrats, McConnell has no one but himself to hold responsible for the sorry situation we now find ourselves enduring. And let’s not beat around the bush on what that means: both Trump and McConnell have the blood of thousands of Americans on their hands, and we can’t let anyone forget it this November.

Original reporting by Felicia Sonmez at The Washington Post.