As the vast majority of the nation frets and worries over the coronavirus pandemic currently gripping the nation, some on the Republican side of politics seem insistent on treating it as an overreaction and using it as an opportunity to get in some cheap shots at their more responsible and rational counterparts across the aisle.

Senator Ted Cruz (R-TX), one of the more cringy and obnoxious members of Congress, embarrassed himself on Sunday after trying to make fun of Michigan Governor Gretchen Whitmer’s decision to sign a measure setting out a $1,000 fines for citizens who fail to maintain proper social distancing protocol.

The original photograph that accompanied the story on Channel 7 News showed Gov. Whitmer surrounded by people in clear violation of the 6-foot distance rule, which prompted Cruz to snarkily remark that it looked like $11,000 worth of fines “right there.” 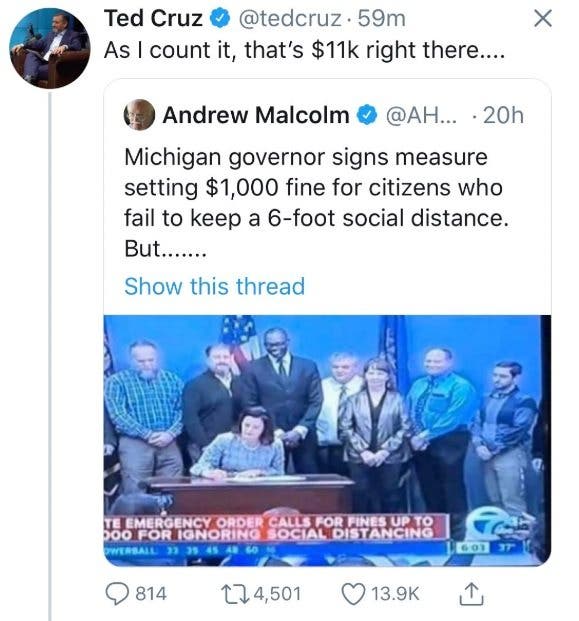 Republicans in general have been disrespectful and dismissive of Democratic efforts to stem the virus spread in support of the Trump administration’s attempts to downplay the severity of the crisis, and it’s infuriating to see an ignorant dweeb like Cruz trying to land a cheap dunk on a Democrat over their efforts to save lives.

This time, however, Cruz completely missed the mark. Whitmer replied to his tweet and pointed out that the photograph accompanying the story was taken in January 2019 and reminded him that promoting that photograph constituted misleading the public during a pandemic — forcing him to delete his tweet minutes later in shame.

Kudos to Whitmer for not only making the hard decisions to save the lives of her citizens but also for refusing to take any lip from nihilistic libertarian morons who would happily see their constituents die from poverty and sickness in the name of the most superficial and childish conceptions of “freedom.”