Since he first slithered into the Oval Office in January 2017, Donald Trump has been consumed with undoing the legacy of President Barack Obama. A lifelong child of privilege who had everything handed to him on a silver platter by his crooked father, Trump with all his racial animus despises the fact that a Black man managed to rise from obscurity to become one of the world’s most beloved leaders while he was busy working in tawdry reality television.

Trump’s obsession with Obama runs the gamut, from Twitter attacks that persist to this day to the more actively dangerous war his administration has been waging against the Affordable Care Act.

Now, it appears the president’s animosity towards Obama has hit a petty new low. NBC News reports that sources in the know have revealed that Trump does not intend to uphold the decades-long bipartisan tradition of inviting his predecessor to the White House’s East Room to unveil President Obama’s official portrait as well as First Lady Michelle’s.

According to those sources, if Trump is reelected this November he might deny the ceremony even longer, leaving it to his successor to unveil the Obamas’ portraits come 2025.

Official White House portraits are different than the portraits of presidents displayed in the National Portrait Gallery. President Obama’s made quite a splash given its unique style when it was unveiled in 2018. 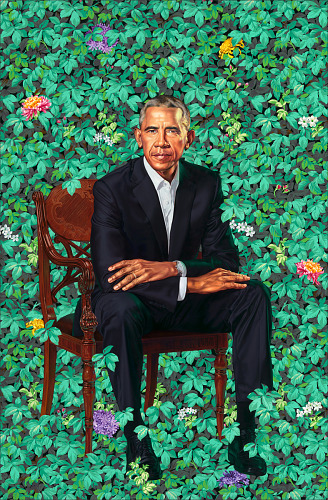 NBC News further reports that Obama himself is uninterested in attending such an event with Trump, an unsurprising preference given Trump’s constant attacks and more recent “Obamagate” conspiracy theorizing. On some level, Obama going to an unveiling with Trump would signal that everything is normal in our country right now, which is so clearly not the case. Refusing to help normalize Trump is the right decision.

In the grand scheme of myriad degradations he has inflicted on his office, this is certainly not Trump’s worst offense. What it is is a reminder of how much he has done to divide this country and erode our traditions. It’s one more offense to add to the pile of thousands of reasons why Donald Trump should never have been made president and why it’s imperative he be voted out come November.

Trump will not be unveiling Barack Obama's official White House portrait, according to people familiar with the matter. The tradition will likely be skipped for the first time in decades. https://t.co/kzAaGfeef7