Here’s a picture of Donald Trump returning to the White House last night after his much-hyped, but extremely poorly attended, rally in Tulsa, Oklahoma launched his return to the 2020 campaign trail with all the trajectory of the Space Shuttle Challenger.

This was the image captured by an ⁦@AP⁩ photographer as a rather disheveled looking Donald John Trump returned from his “fun night” in #Tulsa . pic.twitter.com/KBnefynKyi

It is a picture of dejection, exhaustion, and likely seething anger at his campaign staff who have probably been busy updating their resumes since it became apparent that this rally would be “the greatest disaster in the history of campaign rallies,” as their candidate might be expected to hyperbolize it.

After boasting of a million requests for tickets to attend Trump’s first campaign event in months, the organizers of the president’s Tulsa rally went so far as to arrange for an overflow space to accommodate the crowds that they anticipated wouldn’t fit into the 19,000 seat capacity BOK Center.

Their careful planning made the stunning lack of attendance at the rally all the more obvious as the planned separate speeches by the president and vice president at the second stage were abruptly canceled at the last minute since the overflow space remained largely empty as the Tulsa Fire Department estimated total attendance at the event to be a measly 6,200 people. 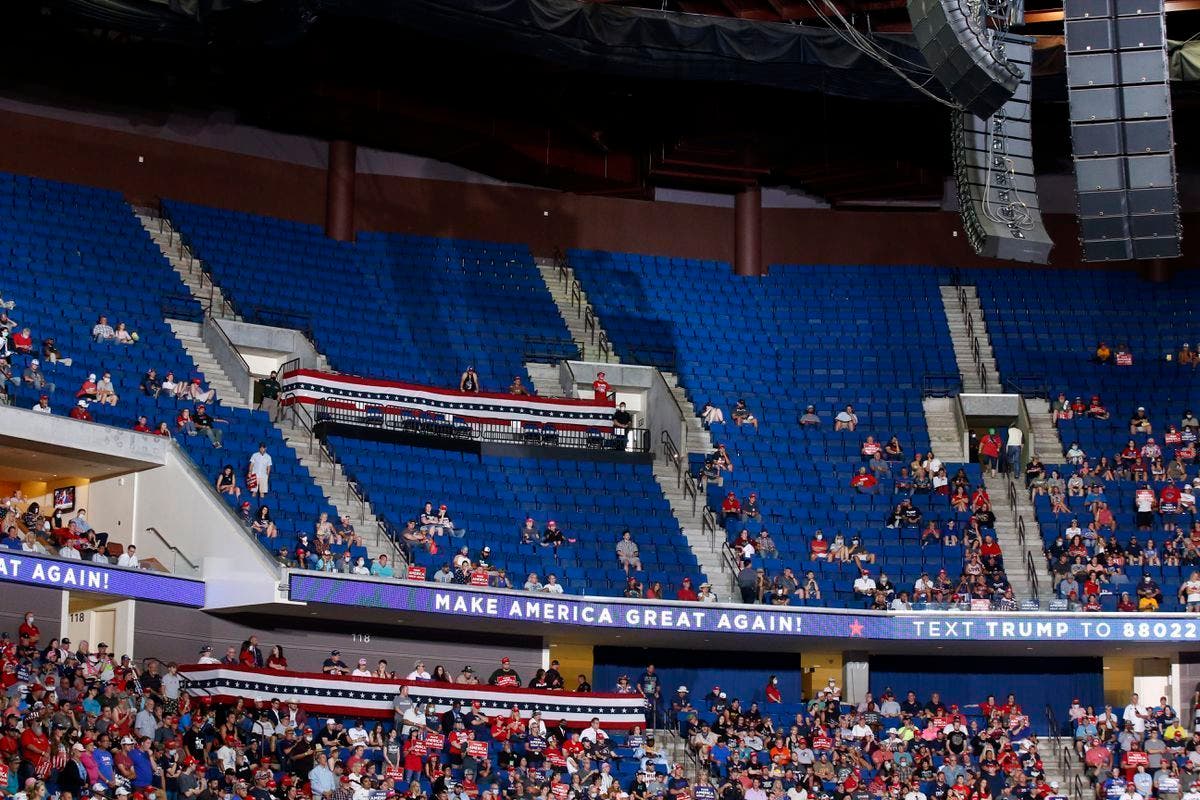 For all of the president’s much-vaunted digital media strategy, it was ironic that this public debacle — that was being dubbed the “Emptysburgh Address” by social media wags — was largely the work of teens on Tik Tok and other social media platforms who had waged a grassroots campaign to embarrass the president by reserving tickets for an event that they had no intention of ever showing up to attend.

As expected the Sunday morning news programs were chock full of Trump surrogates looking to place blame on anything or anyone except the president himself whose multiple missteps since the coronavirus pandemic began, combined with his bellicose reaction to the protests against police murders of African Americans have proven how out of step his reactionary values are with mainstream America.

Most tried to pass off the fable that the entrances to the BOK Center were blocked by dangerous hoards of BLM protestors preventing people from entering the rally, a claim that was quickly proven false by eyewitness reports.

By the time that Trump campaign spokesperson Mercedes Schlapp spoke with Fox News Sunday host Chris Wallace, that claim had mutated into a belief that it was fear of running into violent protestors that had suppressed the turnout. A skeptical Wallace didn’t seem to be buying Schlapp’s argument.

"You guys were so far off that you had planned an outdoor rally, and there wasn't an overflow crowd … the fact is, people didn't show up" — Chris Wallace grills Trump campaign spokesperson Mercedes Schlapp on Trump's underwhelming Tulsa crowd pic.twitter.com/1wdWK7Cpta

With Oklahoma experiencing a surge of coronavirus infections which the president has continued to downplay in order to focus on reopening an economy that he sees his electoral success tied to like an anchor weight, it’s likely that prudent Oklahomans were more conscious of their health and safety than the Trump campaign would ever give them credit for.

While the attendance at Trump’s rally was extremely underwhelming, the content of the president’s rambling speech was even more so.

Trump spent endless minutes defending his perilous shuffle down the stage ramp at the West Point commencement address that he gave last week as well as demonstrating that he was indeed capable of lifting a glass of water to his mouth with only a single hand as if this was an example of superhuman strength and agility.

"I don't want to get water on the tie" — Trump is now whining that people noticed that he seemed to have a hard time drinking water out of a glass at West Point last weekend. He then drinks water with one hand to prove he can do it. pic.twitter.com/MC3u3FR7RT

That the president has no awareness of exactly how ridiculous and pitiful his rants have become was made even more painfully obvious by his politically insane admission that he had actively urged administration officials to “slow the testing down” for COVID-19, the exact opposite of what every medical expert suggests is the only way to start emerging from the pandemic short of a vaccine or cure for the disease.

As Trump continues to minimize the seriousness of the coronavirus problem while the U.S. leads the world in active cases, his rally is likely to leave Oklahoma with a deadly legacy.

Worse still, it’s likely to trigger a Covid spike there in a few weeks, so the rally’s legacy will sadly be measurable in disease, suffering, and death.

The most telling evidence of how massive a failure this return to the campaign trail has been for the president comes from the fact that outside of an innocuous Father’s Day tweet this morning, Donald Trump has been entirely silent on social media since the rally ended.

For this blissful silence, we can thank the teens on Tik Tok and their allies among K-Pop fandom who helped spearhead the inflated ticket requests and punked the White House.

And in an unabashed celebration of schadenfreude at Trump’s massive public humiliation, we will leave you with the full video footage of the president’s #WalkOfShame for your viewing pleasure.