Is it immoral to gloat when bad things happen to horrible people? Don Jr.’s girlfriend gets COVID-19

The Conway family has become a fascinating preoccupation for the #resistance and Washington political circles at large. We have the mother, Kellyanne Conway, who eagerly plays the role of Josef Goebbels to Trump’s Hitler, the shameless spin doctor who coined the phrase “alternative facts” to describe categorically false information presented as true.

She has invented false terror attacks that never happened, violated federal law on 60 separate occasions, publicly trashed a priest after Trump’s goons tear-gassed her, and tried to use MLK quotes to excuse the president’s impeachable crimes. Entirely devoid of conscience and a serial abuser of the truth, she is one of the most loathsome people in Washington today.

Then there is her husband, George Conway, who has spent his entire career supporting the Republican Party and the carefully nurtured undercurrent of white supremacy which the Reagans and Bushes used to hold power and animated their policies.

But now that the metaphorical Ku KluxKlankenstein is alive and in the White House, Conway doesn’t even have the stones to look upon his creation in the face. He and a cabal of other washed-up and obsolete husks of Reagan-style Republicanism have formed what they call the “Lincoln Project” to try to save their sorry careers and make sure that the stain of Trumpism doesn’t keep them from getting invited to dinner parties in D.C. once Trump golfs his way out of the White House.

This “Lincoln Project” ostensibly exists to appeal to the largely mythical “good Republicans” — but in reality, it exists to sell themselves to liberals. Now that blood-and-soil fascism and QAnon conspiracy theorists have possessed the GOP, Conway and his gutless loser pals have decided they will be the vanguard of the “ex” Republican invasion of the Democratic Party, buying our approval with snarky high-quality ads and outrageous anti-Russian Cold War jingoism designed to stimulate the fear receptors of Russiagate-paranoid liberals.

This is not because they actually want to defeat Trump so much as they and the rest of their fellow blood-drenched Iraq War promoters like Bill Kristol and Jennifer Rubin and Max Boot can remain politically relevant and thus ensure the flow of MSNBC contributor checks into their pockets — and not to mention dragging the Democratic Party further rightward until it is what the Republican Party was 20 years ago, just a little nicer to gay people.

Finally, we have fifteen-year-old Claudia Conway, our based and BLM-pilled zoomer TikTok star who has skyrocketed to social media fame by openly opposing Trump on the Chinese short video-sharing app. It appears that her posts have begun to bother her parents, especially Kellyanne, who allegedly has been trying to get her to delete her social media accounts.

Claudia has taken serious issue with this, and publicly exposed her mother’s efforts to silence her on Twitter. 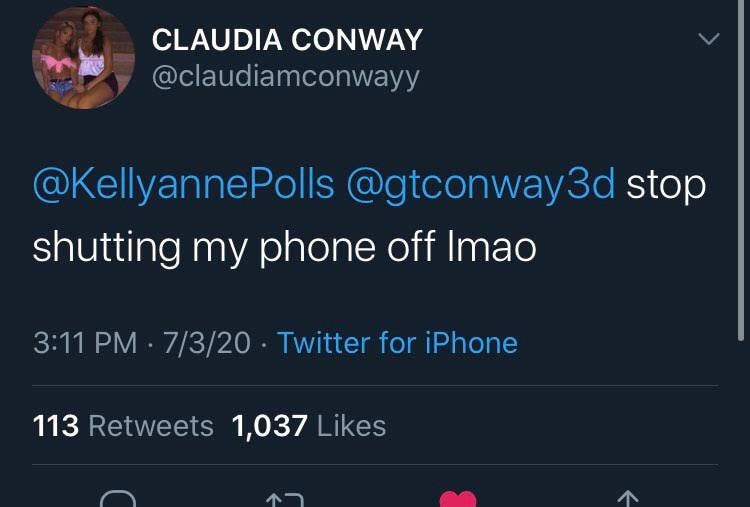 Which she then deleted and posted this instead:

Once her father posted a tweet telling journalists to stay away from Claudia, which they should, Claudia fired back with a brutal smackdown.

It is incredibly ironic that her mother, who spends her entire life fighting for a political movement that is largely based around the idea of “free speech” of conservatives (by which they mean speech should be “free” from consequences or criticism), is trying to silence her daughter for publicly opposing a serial rapist who has destroyed the economy for the foreseeable future and drastically worsened a climate crisis which Claudia’s generation will suffer from the worst.

While we can’t comment on the Conways’ marriage, one has to wonder how a supposedly pRinCipLeD man like George Conway could stomach his wife reveling in the task of state propagandist for a repulsive shell of a man like Trump.

Sounds like there’s going to be some awkwardness around the Conway house this weekend!