The controversial redesign of the White House Rose Garden that was overseen by First Lady Melania Trump was initially met with a thumbs down from critical observers who disliked the new layout and the fact that Donald Trump’s wife changed some of the features initially guided with the input of former First Lady Jackie Kennedy.

Now, just three weeks after the new look of the Rose Garden was unveiled, CNN is reporting that the renovated garden is already under repair.

With the Rose Garden being part of the site of Donald Trump’s COVID-altered televised Republican National Convention activities — in a use of the White House that many say was a blatant violation of the Hatch Act which prohibits the use of federal resources in political campaigns — the White House grounds saw heavy usage as Trump invited over 1,500 people to hear his droning acceptance speech for the GOP nomination on the nearby South Lawn.

The newly unveiled Rose Garden itself was used as the site of the first lady’s own speech at the RNC in front of a smaller crowd of about 75 seated guests.

A CNN source familiar with the problems with the new Rose Garden renovation told the cable news network that the site is experiencing “issues with water drainage” and “some minor complications with updated construction.” 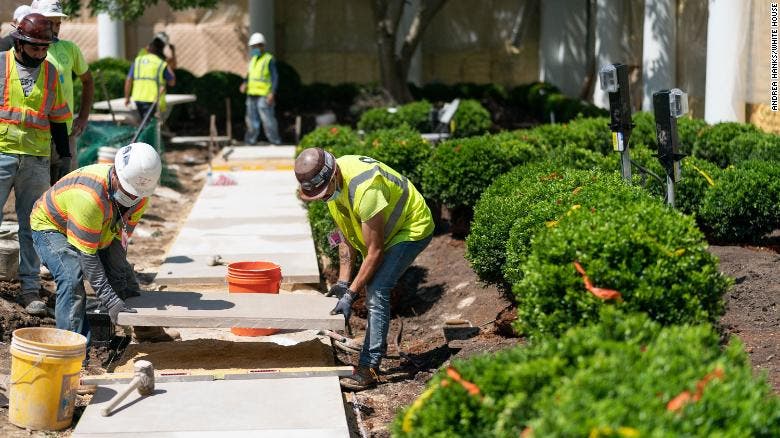 For Melania’s speech, the grass of the Rose Garden was too muddy to host an audience due to lack of drainage from the heavy rainstorms that were taking place at the time, so a “turf” lawn was installed over the original grass instead, a White House source told CNN at the time.

Deputy press secretary Judd Deere told CNN that new sod would be installed and that the replacement sodding would be done “at no cost to taxpayers.” The initial costs of the renovations came from private donations that were mostly solicited by the Trust for the National Mall.

So far there has been no word from the White House as to when the Rose Garden re-renovation will be completed and the area will again be restored to its normal functioning.

Perhaps being married to an unscrupulous former real estate developer with a reputation for cutting construction corners to increase his profits isn’t the best background for planning restorations of historic gardens after all.